Ronnie McBrayer was born in the foothills of the North Georgia Appalachians and claims he barely survived the fire-and-brimstone, fundamentalist instruction of his hard shell Baptist-raised childhood. But in the great comedy of God, Ronnie has spent his adulthood in Christian ministry, both preaching in and protesting against; both loving and leaving; both running away from and returning to the church. The faith he is trying to keep isn’t in organized religion, however. It is in Jesus. Ronnie is the author of the nationally syndicated newspaper column “Keeping the Faith,” as well as multiple books and publications.

How would you describe your calling and mission as a writer and as a Christian?

In a word, I would describe it as “catalytic.” Think about striking a match: With a little push and a little friction, there is a spark. Will it lead to a fire? Maybe. Maybe not. But in the right environment, that little spark can ignite a roaring blaze. As a writer/preacher/follower of Jesus, all I want to do is shower a few sparks here and there, creating space and place for people to hear and draw closer to Christ.

What were your goals in writing Leaving Religion, Following Jesus? 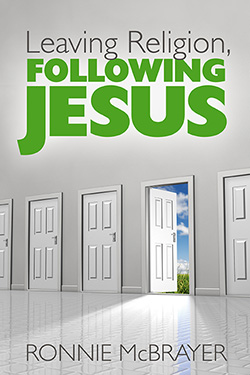 Though this book is not a memoir, in many ways it is the diary of my spiritual journey. Ultimately I found religion to be more of an obstacle in knowing God than a help. I don’t say that to be critical of the church, but to say that Christ must be the focus of our faith, eclipsing everything else. I hope those who maybe find themselves outside the established church will be encouraged by this book to cling to faith in Christ, even though their faith in church institutions may be shattered. And to those within the church, I hope we would read this book and take a serious look at how we “do” church. Much of Christianity is more concerned with protecting its position and power than caring for people. As such, it has little credibility. We must be quick to accept that even something we label “Christian,” if it is not consistent with the words and ways of Christ, should be discarded.

Does Leaving Religion, Following Jesus relate to your most recent book, The Jesus Tribe?

Native tribes of North America, particularly the Cherokee, used to build fish traps in the rivers and streams. This was a triangle built out of stacked stone. When the water was high, fish would swim into it, and when the water receded, the fish would be trapped. The family could then wade out to their trap and snag a meal whenever they needed it. It was a natural storage tank for fresh food. I use this same approach when writing. If an idea strikes me, I make a note and put it in my journal or mental fish trap, knowing I will come back to it later for a fresh idea. It was while writing the chapter titled “Whose Side Is God On?” in Leaving Religion, Following Jesus that The Jesus Tribe was first conceived. In that chapter I say that Jesus offered his people an alternative way to live in the land of the empire. The Jesus Tribe, using the Sermon on the Mount as a starting point, explores and expands upon that alternative way of life. I’m glad I stored that idea in my fish trap.

Can you describe your new book, The Jesus Tribe?

Describing this book is a bit like trying to paint the wind. The concept is simple enough: It’s a book that explores Jesus’ Sermon on the Mount, but that Sermon—only three little chapters—is a lot to get your mind and life around! My premise is that these words and ways of Jesus point toward an alternative culture for his followers, and the metaphor I use, calling on my own Cherokee ancestors, is, of course, the tribe. A growing number of Jesus followers in North America have a splinter in their minds, a splinter that tells them there is something suspicious about attaching a national flag—any national flag—to the cross. Good! We should be suspicious! The church’s identity is not bound to our nation. The church is a unique, called-out people who live as aliens and strangers in a world that is no longer our home. So this book is about the inherent tension in being a follower of Jesus while also living within one of the world’s most powerful nations. I think there is a two-fold question that every marginalized/tribal group has had to wrestle with: How do we sustain our distinctive way of life, and to what extent do we adapt to the culture around us? There are a few possible answers: We can conform and simply become a part of the culture; we can fight, waging a holy cultural war; or we can concede and just give up. All of these are dead ends. The way of life is the way of Jesus, a way crystallized so well in the Sermon on the Mount.

How do you hope The Jesus Tribe might impact readers? 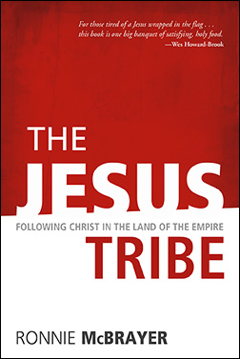 Well, let’s return to the idea of writer as catalyst. This book will definitely cause a few sparks, and I don’t expect everyone to agree with my conclusions. In fact, I expect some of my “God-and-country” friends to all but disown me. But if this book can wake a few readers to the fact that there is no such thing as an “American Christian” (there are, however, Christians who happen to reside in America), that our dependence upon and attachment to the empire’s power is extremely dangerous, and that the way of Jesus graciously resists “how things really work” in the world, then the effort will be worth it. My intent isn’t to polarize. It’s to raise questions in the reader’s head and heart. Some of these questions I won’t be able to sufficiently answer with this book—maybe no one can answer them. But my Cherokee ancestors would say the right answer is not as important as raising the right questions. That is my hope.