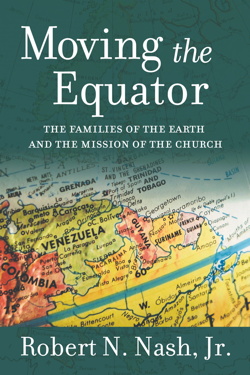 What were you hoping to achieve with your new book, Moving the Equator: The Families of the Earth and the Mission of the Church?

My hope is that the book offers followers of Jesus and congregations a biblically-grounded theology of mission that encourages them to be as open to receiving the blessings of other religions and cultures as they are to extending God’s blessings to those religions and cultures.  I know my own Baptist tradition well enough to know that scripture is the foundation for our beliefs about God, church, and mission but I also know that our own interpretations often become trapped by cultural lenses through which we read scripture.  My intention was to present a new reading of scripture and of culture that offered a path forward in an age of diversity and pluralism.  How might we think differently about Christian mission in such a world?

What do you feel is the most challenging aspect facing churches today?

Without doubt, it is our fear of otherness and difference.  We simply do not possess a theology of mission that is adequate to a day of competing world views, religions and cultural perspectives.  We do not know how to receive a blessing from someone who offers such blessing to us from within their own worldview and faith.  We have been taught to “defend the faith” rather than to embrace those from other faiths with openness, curiosity, and a listening spirit.  Without such embrace, we miss the divine blessing that others want to offer to us.  In this way we diminish our own understanding of God even as we create walls that prevent others from receiving the blessing we want to give to them.

How can we, as a people of faith, recognize our own equators moving?

This is a great question.  My hunch is that deep within ourselves we know that something is not quite right.  We sense that the grand narrative or story of the faith that we received from the previous era of the church—the era of denominations and revivalism and evangelism, etc.—was adequate for that previous age but it is not adequate for this age.  The problem is not that others beyond the church sense this inadequacy; rather, the reality is that those of us who are in the church understand that the forms sufficient to the previous era no longer work and no longer have the meaning they once did.  When this happens, we must return to scripture, read it through the light of current cultural challenges and not old ones and find new paths forward.  Such a process allows scripture to come alive with truth we could never have seen in earlier eras.

Once again, change is coming from beyond the church as it always has.  This isn’t unique to the church.  In some ways, it is true of all institutions.  Institutions move between the forces of order and those of revolution with most revolutions occurring in the wider culture before they occur in the institution.  That said, we are still quite early in this moment of revolution.  Revolution is never instantaneous for a body like the church. A John Wycliffe comes along in the fourteenth century and a Martin Luther comes along in the sixteenth century.  In between the two, revolution happens.  I would say we are about sixty years in, if we look back to the decade of the 1960s as the beginning of the revolution.  The Civil Rights movement, the Immigration Act of the mid-60s, the Vietnam War, Watergate—all of this inaugurated change from outside the institutional church and especially the predominately White institutional church.  We are still waiting to see what new forms church will take as a result of forces beyond itself that reshape it.  I would describe this as substantive and foundational and not simply perception.  Church as we know it now will be shaped into something that we cannot yet imagine.  Just ask Pope Leo X who was the pope when Martin Luther posted his 95 Theses on the chapel door at Wittenberg.

How do you suggest people and churches “embrace” such a change, especially when it is so tied in with fear? Is fear the largest deterrent change?

Fear is a major deterrent as is the loss of power for those at the center of old forms.  In many ways, the diversity that we all deal with each day is in the process of reshaping us.  We work in diverse workplaces and with people of other religions and cultures.  We come to know their holidays and to meet their families.  They become “real people” to us.  This is another way in which what is happening outside the church begins to influence what is happening inside the church.  At some point, it becomes familiar to us rather than strange.  The same thing is happening in our families as children marry persons from cultures, ethnicities and perspectives different from our own.  I suggest the simple step of nurturing a friendship with a colleague of another religion and seeking to understand that person’s faith from his or her perspective.  I also encourage us to ask good questions, ones that are intended to let the other person tell his or her story.  We need to stop asking leading questions and simply allow the other person to lead us toward perspectives we didn’t even know existed.

Could you explain the structure of your book? Did your process or own perspective change throughout your writing?

It was my conviction that we need to reverse the process of interpreting culture through the lens of scripture.  I was convinced that we were misleading ourselves by implying that we had no cultural lenses when we engaged in biblical interpretation. For that reason, I focused on the concept of culture in the second chapter of the book and advanced the argument that human cultures are themselves sacramental in the sense that grace comes to us from God through other worldviews and perspectives.  I offer in that chapter a summary of church history in which I demonstrate the influence of culture on the church in each era and then present my perspective on the challenges and possibilities of our own day.  The next several chapters focus on the Hebrew Bible, the Gospels and Paul and unlock those various sacred texts through the lens of our own cultural challenges and opportunities.

Yes, my perspective did change.  The wonderful reality about writing is that you are working it out as you write.  You don’t come to the writing process with everything firmly set in your own mind.  Or at least I don’t.  I’m reading as I write.  I’m dialoguing with ancient and modern texts and arguing with the great thinkers of the church throughout the ages.  There is much in the book that I wrote that I didn’t know when I started.  I had not, for example, understood the Gospels as steps toward unlocking an openness to otherness and diversity by their very placement in the canon.  I learned much about scripture and other ways of interpreting biblical stories that I thought I fully understood only to discover that I was either reading them incorrectly or missing something that was waiting to be discovered.

What is something that still surprises you during your preaching, teaching and writing?

The power of the Story of God in Jesus Christ.  It always catches me off guard.  I can’t possess it nor can I fully understand it.  It is far more complex than I ever imagine.  And it is not threatened at all by the perspectives of other faiths and traditions.  In fact, I am a better follower of Jesus because of the witness of my friends of other faiths and cultures.  And I understand far more about God because I have been blessed by them.