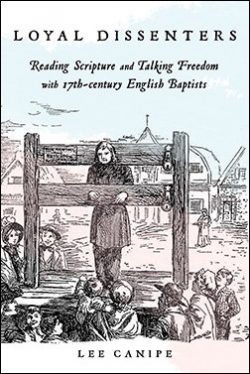 Lee Canipe serves as the pastor of Providence Baptist Church in Charlotte, North Carolina. He has also taught in the department of religion at Chowan University. Before coming to Providence, Canipe was pastor of Murfreesboro Baptist Church and a doctoral fellow in the J. M. Dawson Institute of Church-State Studies at Baylor University. He and his wife, Hilary, are the parents of a daughter, Helen, and two sons, Watt and Peter.

What were you hoping to achieve with Loyal Dissenters?

My primary objective in writing this book was to help my fellow Baptists in North America recover the ability to talk theologically and biblically about our freedom as Christians. It’s a skill I think we’ve largely lost because we live in a culture that, at least for the last two centuries or so, hasn’t required us to talk about freedom in distinctively Christian language. We’ve let the First Amendment to the Constitution do our heavy lifting, and as a result, our theological muscles have grown a bit flabby. If this book moves just one Baptist to stop and wonder, “What are we really talking about when we talk about freedom?” then it will have done a good day’s work. I’d be thrilled if our future conversations about religious liberty incorporated more Jesus and less Jefferson.

How important is it that these early Baptists were loyal dissenters?

Very. It’s easy to fall into a false choice of either Romans 13 or Revelation 13—that is, believing that the government is either furthering God’s will in this world or that it’s fiercely opposing God’s will. The government performs necessary functions that I’m grateful for each and every day. At the same time, the government—any government in any country—is not the same thing as the kingdom of God. The New Testament teaches us that God intends to work through the church to bring God’s will for creation to fulfillment. Christians who expect that from the government are putting their eggs in the wrong basket.

And that’s why it’s so important that we have examples of early Baptists who insisted that these aren’t either/or choices. More often, it’s a matter of figuring out how to do both, as long as we can do so in good conscience.

Loyal dissenters not only understand this dynamic—they live it. They are free to be redemptively critical in their love of country because they are committed to serving a higher truth and a higher love.

No. For our 17th-century ancestors, the Bible spoke with an authority that seems surprisingly settled to us. They argued over interpretations of Scripture, but not its essential authority as God’s Word. That was a given. I suspect that even the most committed Christians today are more likely to understand Scripture as just one voice—an important voice, a reliable and trustworthy voice, yet still just one voice—among many voices claiming authority to guide our lives and decisions. Our great challenge, as we understand it, is to make sense of Scripture given the reality of the world and its economic, cultural, and political pressures. My sense is that for the 17th-century Baptists, it was the other way around: How can we make sense of the world and its various pressures given the reality of God’s truth as revealed in Scripture?

What connections do you see between 17th- and 21st-century Baptists?

The most obvious one is the fact that our world is increasingly coming to look more like their world. Seventeenth-century Baptists were religious outsiders in their own country. For the better part of the last 150 years or so, Baptists in the United States—especially in the South—were the very opposite of that. We were insiders and, for better or worse, the culture reinforced (and in some cases, helped determine) our religious sensibilities.

That’s changed. Many Baptists see this change as a threat, and I get that. Fighting tooth and nail to “take back our country,” though, misses the point. The 17th-century Baptists understood that any transformation of society in the name of Jesus was going to have to begin with faithful Christians, acting both as individuals and as a community to bear witness to God’s truth. They certainly didn’t expect the king or Parliament or any political faction to pursue the church’s mission in the world.

Some 400 years later, we find ourselves in a position that, in some ways, might feel familiar to our 17th-century ancestors. If, once again, being countercultural like this makes us better, more faithful and intentional Christians, then the changes that are causing so much angst these days among people who love the church may end up being blessings in disguise.

What surprised you the most while researching and writing Loyal Dissenters?

I think what surprised me most was the sheer volume of material by these prolific 17th-century writers that has been preserved. Much of it is in its original published form. I mean, it’s not like these Baptists were super popular in England at the time. Their pamphlets, sermons, and so forth wouldn’t automatically have seemed like stuff worth saving, except maybe to a handful of like-minded believers. I suppose, in a way, it’s similar to how remarkable it is that some folks back in the 1st-century thought it worthwhile to save some of those letters from that rabble-rouser named Paul. What if they’d treated that material like we treat letters and magazines when we’re done reading them today?