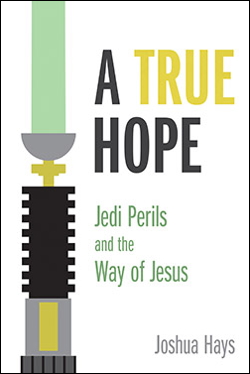 Joshua Hays is a Research Fellow for Baylor University’s Institute for Studies of Religion, where he investigates seminary education programs within maximum-security prisons in Louisiana and Texas. He also serves as co-editor of the annual Proceedings of the Christianity in the Academy Conference and works as a freelance editor. Joshua earned a bachelor’s degree in Christian ethics from Union University in Jackson, Tennessee, and the M.Div. from Samford University in Birmingham, Alabama. He has also served in a variety of ministry roles within churches and parachurch organizations in Tennessee, Alabama, and Texas. Joshua resides in Waco, Texas, with his wife Rebecca, who is currently completing her Ph.D. in Hebrew Bible/Old Testament at Baylor.

What were you hoping to achieve with your new book A True Hope: Jedi Perils and the Way of Jesus?

I want to introduce people who share my love of Star Wars to the good news of Jesus. Over the course of the book, I try to tell the story of Scripture by using familiar characters and scenes from the movies. My hope is that people who wouldn’t normally read a theology book or even attend a church service will pick up this book because of Star Wars and end up meeting Jesus. I also hope that it will help other Christians to communicate their faith to their friends and neighbors.

When did you begin to make connections between Christian ethics and Star Wars?

In some ways I started to make those connections the very first time I saw the movie, but I really started to think seriously about them as a seminary student. I started writing about some of the similarities and contrasts between Star Wars and the gospel in order to process my course material in a non-academic way. At the same time, I was teaching a youth Bible study in my church and gradually started incorporating the Star Wars material there. The kids really connected with it and ended up engaging more meaningfully with Scripture, so I knew then that I was on to something exciting.

Can you talk a little about the structure of your book? Why did you put it together the way did and how did you decide what quotations to use?

I wanted to choose quotations from the Jedi Knights because they are the best characters of the movies, the purest spokespersons for the Star Wars worldview. I draw from the major Jedi of all six movies—Qui-Gon, Obi-Wan, Anakin, Yoda, and Luke Skywalker—but I don’t always follow the on-screen chronology. Instead, I organized the book around the big ideas of the gospel. I begin with the importance of truth and inspiration, move through creation to the problem of sin and fallenness, and conclude with the Bible’s solution to this problem. I trusted that the Star Wars story arc will be familiar to most readers, so I structured the book around the story arc of Scripture instead.

In the book’s introduction, you talk about the “enduring popularity” of Star Wars. Why do you think Star Wars has such staying power in your life?

I think two reasons help explain why I’ve loved these stories so well for so long. First, the Star Wars story is constantly growing. Ever since the first movie appeared in 1977, others have added to George Lucas’s original tale. There’s always more to learn about the characters and their unique histories and motivations. The upcoming release of Episode VII in December 2015 will only fuel more of this storytelling. Second, Star Wars fosters community. There’s a misconception of science fiction fans as loners who live in their parents’ basements, but the stereotype could hardly be more false. I continually meet people who love Star Wars and I have instant camaraderie with them. Mutual love for an imaginative story often provides the spark for more meaningful relationships.

If you were advising someone who has never before seen the six movies that A True Hope focuses on, in what order would you tell her to watch them?

Great question! I’ve always been an advocate of beginning with the original trilogy, the episodes now known as IV, V, and VI. Recently, though, a friend suggested watching IV and V and then returning to the prequels before finishing the original trilogy with Return of the Jedi. This way preserves the surprise ending to The Empire Strikes Back but also some of the suspense around Palpatine in the prequels, and the saga ends on a high note with Episode VI rather than the darkness of III. And be sure you check out the newest installment, The Force Awakens, after that!

Jedi all the way, with a green-bladed lightsaber!