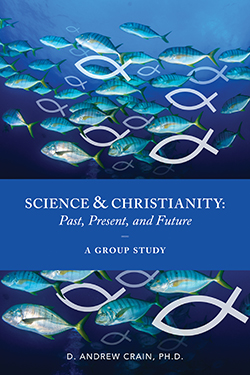 Dr. Drew Crain is Professor of Biology at Maryville College in East Tennessee. Passionate about his undergraduate students, Drew has won the “Teacher of the Year” award several times and can often be found teaching and leading hikes in the Great Smoky Mountains National Park. Dr. Crain’s main area of research is focused on environmental health, but recently his scholarly activities have turned to the compatibility of science and Christianity. Drew is active in his local church, where he has served as elder, pastoral council member, and Bible study teacher for the past 20 years.

How did you come to write a book about the topics of science and Christianity?

I have taught a class at Maryville College on the historical and contemporary interaction between science and Christianity, and the class has always been very well received by my students.  When thinking about to expand the information beyond my campus, I considered writing a book on the topic. That led to the question of “what kind of book?” Whereas there are countless books in academic libraries about the interaction, there are very few publications for Christians, seekers, and Christian groups.  Thus, I decided to write a short book for churches and study groups that examines the past, present and future interactions between science and Christianity.

What is your hope of how your new book might impact readers?

I hope that the book will dispel the idea that science and faith are in conflict.  Far too many individuals believe that they have to choose between their Christian faith or science, but such an idea is very recent in human history.  I hope to show both seekers and believers that both Christian faith and science contribute to a fulfilled and fruitful life.

There are Christians who ignore or devalue science because they think their faith is inconsistent with it, and there are people who are averse to questions of faith or even considering questions of faith because they think science has the only truth. Neither of those is a healthy option. The book targets both of those populations, showing that science and Christianity are not mutually exclusive. This book addresses science in relation to Scriptures so that parishioners will understand that the commonly perceived ‘conflict’ between science and Christianity is not a viable mindset.

What is the biggest misconception about faith and science?

I hope and pray for a scientifically-informed Christianity that will pervade the Church.

Can you talk a little about the structure of your book? How did you come to separate “Past, Present and Future”? What values come from such a distinction?

As a scientist, I like to compartmentalize my thoughts.  Thus, I decided to examine the chronology of the interaction.  The majority of the church fathers did not have any conflict with “science,” and the majority of individuals involved in the scientific reformation were individual of tremendous faith.  It is only recently that a perceived conflict has been positioned, and I argue that there is no conflict at all.

To you, what is the most exciting possibility of the future of science and the Church/Christianity?