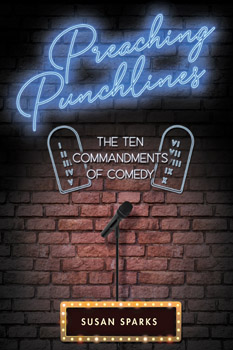 As a trial lawyer turned standup comedian and Baptist minister, Susan Sparks is America’s only female comedian with a pulpit.  A North Carolina native, Susan received her B.A. at the University of North Carolina and a law degree from Wake Forest University.

After ten years as a lawyer moonlighting as a standup, she left her practice and spent two years on a solo trip around the world, including working with Mother Teresa’s mission in Calcutta, climbing Mt. Kilimanjaro, and driving her Jeep Wrangler solo from NYC to Alaska. Upon returning home, she entered Union Theological Seminary in New York City, where she earned a Master of Divinity and wrote an honors thesis on humor and religion. In May 2007 Susan was installed as the 15th Senior Minister of the historic Madison Avenue Baptist Church in New York City. She was the first woman pastor in its 170-year history and she remains there to this day.

What was your hope with writing Preaching Punchlines: The Ten Commandments of Comedy?

I believe that smart, focused, joyful communication is a matter of life and death—especially in preaching. Who could forget in the book of Acts when Eutychus fell to his death from window because he was lulled to sleep by the Apostle Paul’s long and boring preaching.

Words can slay people’s spirit, eradicate their joy, gut their passion. Words can alienate, divide, shame, and destroy community. They can corrode budding spiritual seekers through boredom, irrelevance or confusion. Now more than ever, we need to harness the power of joyful words to heal our broken world. Preaching Punchlines was my humble attempt to do exactly that.