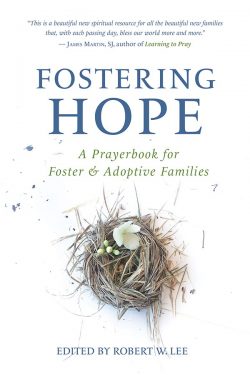 Robert W. Lee is a pastor, author, and activist. Having been featured on CNN, MTV, and ABC’s TheView, Lee is now most passionate about making sure his adopted daughters receive the fullest life he can offer. A graduate of Duke University and Appalachian State University, he lives in Statesville, North Carolina, with his wife, Stephanie; his daughters, Phoenix and Athena; and their poodle, Frank.

Tell me a little about Fostering Hope: A Prayerbook for Foster & Adoptive Families. How did you come to write about such a topic and what was your hope for your how new book might impact readers?

Fostering Hope was born out of my desire, along with the desire of those around me to center the foster and adoptive experience in prayer. Churches can get a lot of things wrong when it comes to faithfully addressing the need for foster care and adoption services, often couching these realities in broader political issues or theological underpinnings. To me this is an issue of grave importance that has possibilities for everyone to participate in through their prayers and presence to those going through the process. I sought out all kinds of folk from various different backgrounds because I wanted to show that this is an issue that not only strikes at the heart of God’s people but indeed the very heart of God. I equally was concerned with insuring that the typical tropes and misconceptions in adoption and foster care were avoided so that parents, caregivers, relatives, friends, and congregations could hold fast to their moorings while embracing those among us who are going through this process.

In Fostering Hope you mention that prayerbooks can be a guide for us and “offer fresh expressions of grace.” What are some of the misconceptions surrounding prayerbooks and what is your advice to anyone who is hesitant to start a prayerbook, but want to deepen their relationship with God?

Personally, I love prayerbooks! They center and guide my daily devotional and worshipping life, along with ground me in a tradition that has been in the works for ages. That said I recognize that a prayerbook that is stuffy might seem unapproachable, or untenable for someone on this journey. I sought to make this a fresh expression of prayer in a few ways. Most notably of those ways was who I included as those who offered prayers. We have an Episcopal Bishop, a Jewish Rabbi, a 5-year-old adopted child, and countless others. Just in that sentence you see the full breadth of possibility in prayer. It is also true that we sought to be inclusive of LGBTQ children and parents, cross-racial and geographically diverse adoptions. We were careful to pay attention to scenarios that are difficult, like death and illness, while simultaneously celebrating thepromises that adoption and foster care can hold. END_OF_DOCUMENT_TOKEN_TO_BE_REPLACED

The Reverend Rob Lee received a Masters in Theological Studies from Duke University Divinity School in 2017. Rob is featured in the Statesville Record and Landmark as a columnist in the faith section. He has also appeared in NPR’s Weekend Edition, The State of Things, The View, MTV’s Video Music Awards, Ministry Matters, the Methodist Federation for Social Action, the Huffington Post, and the Washington Post. He lives in Statesville with his wife, Stephanie, and their poodles named Frank and Lizzie. Rob is also author of the memoir A Sin By Any Other Name (Convergent, 2019).

First, what is a stained-glass millennial? 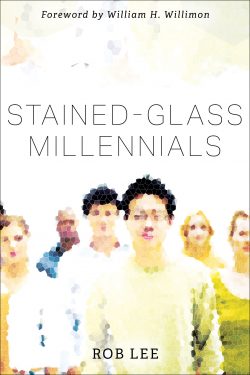 Eugene Peterson said that every preacher preaches one sermon, that preachers drive home one message consistently throughout their ministry. If this book is any indication of what my one sermon is, it’s that God is not done with us yet. God has not brought us this far to leave us here alone, and stained-glass millennials are a testament to that.