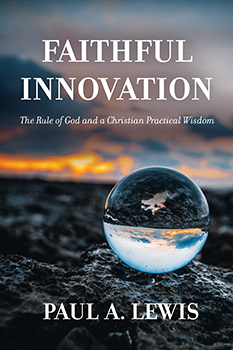 Paul A. Lewis is Professor of Religion in the College of Liberal Arts and Sciences at Mercer University in Macon, Georgia. He previously taught at schools in Minnesota, Ohio, and North Carolina and has also served in a variety of ministerial roles with churches in Missouri, California, North Carolina, and Virginia. He earned his PhD in Theology and Ethics from Duke University and has long-standing interests in moral development and the virtues. He is also managing editor for Tradition and Discovery: The Journal of the Polanyi Society and an avid fan of jazz, college basketball, and motorsports.

How did you come to write a book centered on the difficult topic of ethics?

It was a long time coming. As I say in the preface of the book, the ideas had been percolating for a long time and grew out of my research and teaching. One reason to write it now is simply a need to see if there is a center to my work. But more importantly, this was a good time because the culture wars have so polarized us that we want to pull away from the hard work of ethics by retreating into moral absolutism or relativism. We need to find a way to avoid those temptations and I think this way of approaching ethics can do that.

Why is the topic of ethics, Christian ethics, more specifically, so often misconstrued?

I think we have a mistaken idea about ethics for a variety of reasons. For several hundred years, western philosophical and theological movements have striven for certainty. We have sought to base knowledge on foundations that are true in all places and times. That may work for certain forms of mathematics, but not in all areas of human inquiry, especially ethics. To be sure, ethics requires hard thinking about difficult matters. It is because these matters cannot be answered with the precision of a mathematical formula that we are tempted to quit thinking and retreat into the absolutism and relativism that I mention above. I get it. But that doesn’t mean we should stop thinking.

Another reason ethics is misconstrued is the way we often teach it. Too many times, we focus on making decisions in crisis situations when we don’t have enough time or information to process the problem. We ask people to justify choices by pulling principles out of the air or guessing at hard-to-calculate consequences. One example is this exercise is this: “Your ship, which is carrying Jewish refugees, is stopped by a Nazi submarine. Do you lie to the Nazi captain about whether you have Jewish refugees in the hold of your ship? Why?” The problem with this type of exercise is that it hides the fact that the kinds of people we are plays a large part in how we decide things. Is the captain self-centered or other centered? Brave or cowardly? A selfish person cannot be counted on to reason the same way as a self-less person. Character matters.

I think Christian ethics is misunderstood for a couple of reasons. One is that we have not taught people about the richness and complexity of the Christian tradition. If we had a better sense of that history, we would see that Christianity has always been an argument about what it means to be a Christian—it has always been about innovating faithfully. What faithfulness means in practice has always been contested. Additionally, some of us want to use the Bible as magic 8-ball. In doing so, we have failed to realize, as one of my mentors put it, “Just because it’s in the Bible doesn’t make it Christian ethics.” Maybe a large part of what is in the Bible is there to help us learn from the mistakes of others.