Pamela R. Durso is executive director of Baptist Women in Ministry in Atlanta, Georgia, and is an adjunct professor at McAfee School of Theology. She received her Ph.D. in church history from Baylor University. As mother to Michael and Alex, she is discovering with her husband, Keith, the adventures of parenting teenagers. She likes researching and writing history, especially the history of Baptist women, but she loves sitting down with a cup of coffee and listening to people’s stories.

You are the editor of This Is What a Preacher Looks Like: Sermons by Baptist Women in Ministry. What interested you about this project? How did it come about? 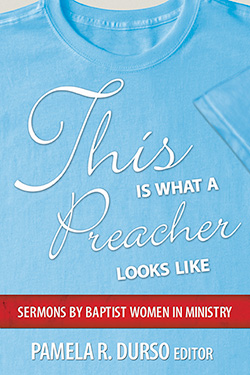 The t-shirts came first—bright, aqua-colored t-shirts with “This Is What a Preacher Looks Like” printed across the front. Baptist Women in Ministry (BWIM) produced and distributed the t-shirts during the celebration of the organization’s twenty-fifth anniversary in 2008, and they made quite an impression. But apparently the t-shirts made more of an impression than we imagined because late in 2008, Keith Gammons of Smyth & Helwys contacted me about putting together a collection of sermons by Baptist women. Keith wanted this collection to be named after the t-shirts. So you take a
really great t-shirt, add a clever editor with an idea, and the result is This Is What a Preacher Looks Like: Sermons by Baptist Women in Ministry.

How is the book organized? What’s in it?

The book is a collection of thirty-eight sermons by thirty-six Baptist women. The collection is divided into two sections. The first section has five sermons preached at historic turning points in Baptist life. The second section consists of thirty-three sermons preached on Sunday mornings to a gathered congregation, on a weekday morning to students and faculty worshiping in a seminary chapel, on a Wednesday night to teenagers worshiping around tables, or in a meeting room on a college campus. These sermons provide a glimpse into the hearts and minds of Baptist women who are ministering and preaching in the first decade of the twenty-first century. They are a slice of our history as Baptists, introducing us to the daily concerns, the theological insights, and the journeys of Baptist preaching women.