Michael L. Ruffin is the Connections curriculum editor with Smyth & Helwys Publishing, an adjunct professor at Mercer University, a newspaper columnist, and a poet. He posts opinion pieces on the blog On the Jericho Road and poems on Instagram (@michaell.ruffin). A former pastor, he still preaches when and where he’s invited. He and his wife, Debra, have two children and two grandchildren. 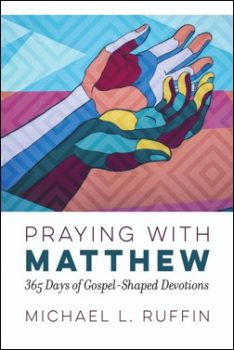 What were you hoping to accomplish when you sat down to write Praying with Matthew?

Why the book of Matthew? What was it about Matthew that inspired you?

The formation and arrangement of the New Testament Gospels fascinates me. Most scholars think that Mark was the first Gospel to be produced, followed a few years later by Matthew and Luke, with John coming even later. But Matthew was placed first in the New Testament canon. That may be because it had assumed a central role in the early church’s teaching and preaching due to its organization into five parts, each containing a narrative section and a teaching section. When I chose Matthew, I may have had a thought in the back of my mind that I might like to write books of prayers based on each of the four Gospels. Matthew comes first in the canon, so I started there. But if I was going to work through and write prayers on only Gospel, it had to be the one that includes the Sermon on the Mount.