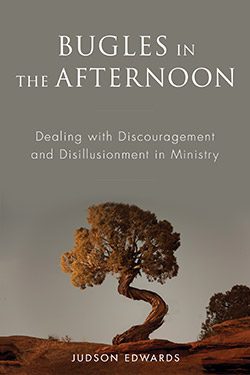 Judson Edwards is the author of 12 books. A pastor for thirty-eight years, he now lives in Cedar Park, Texas, with his wife, Sherry, and spends his time writing and drinking coffee at Starbucks.

What were you hoping to achieve with Bugles in the Afternoon?

I had an uncle, Glen Edwards, who was my “go-to guy” when I grew discouraged or disillusioned as a pastor. He was a pastor, too, and had “walked miles in my shoes.” So whenever my ministerial well ran dry, I either called or went to see him. His wisdom, spirit, and perspective always lifted my spirits. I wrote Bugles in the Afternoon hoping that it would do for weary church leaders what those conversations and visits with my Uncle Glen had done for me.

What is the central lesson that you can offer to ministers trying to survive the pain ministry brings?

I think most ministers need to be disillusioned. There are many illusions that we should give up, so I spend some time in the book dealing with six of them specifically.

We enter church ministry with the illusion that we will hear Trumpets in the Morning, which was the title of a book I bought when I first became a pastor. I soon discovered that ministry is full of stress and conflict. That’s why I titled the book Bugles in the Afternoon. We ministers won’t be able to hear trumpets every morning, so we might as well get rid of that illusion and be content with bugles in the afternoon.