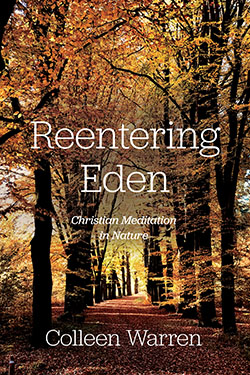 Colleen Warren is a professor of American literature at Taylor University in Upland, Indiana, where she has taught since completing her MA and PhD at the University of Florida. In addition to literary criticism, she writes extensively about nature, spending as much time as possible in her Thoreauvian cabin on her seventeen acres and blogging erratically at 1womanwandering@wordpress.com. She has been married to her husband, Jim, for forty years and is the mother of four grown children.

How did you come towrite a book on meditation in nature? What is your hope for how your new book might impact readers?

When I went to bookstores, I noticed that a lot of books were being written about meditation, mindfulness, yoga, and spiritual practices. People were clearly looking for something to alleviate the stress they were feeling, but I noticed that most of these books had an Eastern religion focus. I knew that meditation was a long established biblical practice, so the fact that no books seemed to approach meditation from a Christian perspective seemed a notable lack in the market. Most of my writing already focused on nature, and I noticed that this too was receiving a lot of attention, especially the idea of “forest bathing,” which originated in Japan and was also being touted as a stress reliever. It seemed a natural fit to focus on both nature and meditation in the book, since I was convinced that Scripture and nature were the two means through which God reveals himself. As I did the research, I was surprised to find out that mediation and spending time in nature had almost identical benefits, making nature meditation a doubly beneficial practice.

My goal in writing the book was to convince readers of this truth. If this book helps them to establish a consistent practice of meditation in nature, I know that their relationship with God will be enriched and deepened. So I’m really praying that those who read it will actually practice the concepts in it as well.

Can you talk a little about the structure of Reentering Eden? Why did you focus on silence, solitude, stillness, and attentiveness?

I believe that these qualities enhance meditation. Our society privileges their opposites: instead of silence, we prefer sound, conversation, even noise; instead of solitude, we promote community and connection; stillness is valued less than productivity and action. These societal values are, of course, not negative—God also values these aspects, but when we practice them to the exclusion of silence, solitude, and stillness, we miss out on the benefits of quieting ourselves before God. Another cool thing is that these are the qualities that nature itself embodies: nature is mostly silent, and the sounds it does make are a language we cannot understand, and thus it is soothing and non-disruptive. Nature, in its most primitive state, is also unpeopled, and nature is also rooted, stable, and slow to change, giving it an intrinsic stillness as well. I added attentiveness as a necessary trait because attending closely to nature and to God through meditation enhances and deepens our experience of both.

What are some of the largest misconceptions about meditation’s role in Christianity? How do these misconceptions influence the goal, if that is the goal, of finding/creating a physical and personal “Eden”?

Most people, when they hear the word meditation, tend to think of someone in the lotus position with their fingertips touching, chanting a mantra. This is the “version” of meditation associated with Eastern religion. As I noted earlier, I wanted to emphasize that meditation has a rich tradition within Christianity as well. If we define Eden as a place where we can perfectly commune with God, I think meditation in nature is the closest we can come to that in this world.