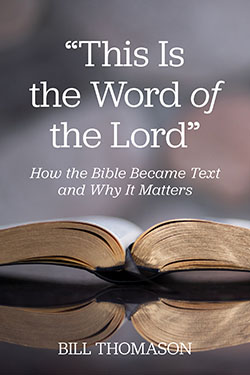 Bill Thomason received a BA in English from Oklahoma Baptist University (1965) and a BD (1969) and PhD (1972) from The Southern Baptist Theological Seminary. He has taught philosophy and religion (at the University of Louisville, Stetson University, and Indiana University Southeast), managed bookstores, and sold books as a publishers’ representative. Thomason is the author of two other books, and, now retired, he is concentrating on writing about biblical, theological, and cinematic subjects. He and his wife live in Louisville, Kentucky, and enjoy travel, especially to Great Britain and other places in Europe.

How did you come to write a book empirically surveying the Bible’s origin?

One Sunday morning I became aware of a tension that exists arising out of our practice of using the Bible as a guide for our faith and practice.  On the one hand, after hearing the lectionary readings for that Sunday, the lector had said, “This is the Word of the Lord,” and we had responded, “Thanks be to God.”  Yet, on the other hand, every preacher who had stood in that pulpit from the time I first worshiped at Crescent Hill (September, 1965, when I moved to Louisville to enter Southern Seminary) had been trained in critical methods of biblical interpretation, and these methods had called into question some traditional beliefs about the Bible (e. g., the Mosaic authorship of the Pentateuch or the unity of the Book of Isaiah).  So, the fundamental tension I wanted to address was this: In what sense is the Bible the Word of God to those of us trained in these critical methods?  How does modern biblical scholarship, with its methods of reading the Bible in its historical context, affect the authority of the Bible today?

What were you hoping to achieve when you sat down towrite “This Is the Word of the Lord”?

Though I got a very good grounding in the basic disciplines of theology at Southern Seminary in the late ’60s and early ’70s, the Seminary failed its students in one crucial respect.  It really did not prepare most of its graduates with the ability to translate what they had learned in seminary into language and concepts that would allow their congregations to understand that learning.  It would have been enormously helpful to have had a course, toward the end of one’s seminary career, that would do two things.

It would summarize the basic conclusions of modern biblical scholarship, giving graduates an overview in non-technical language of what those conclusions were. This course would show how the two testaments gradually evolved and were edited into the texts we have today; it would show the grand sweep of biblical narrative; and it would demonstrate how the various parts of the Bible eventually came to fit together.  Students would, of course, have learned all of this in the separate Bible courses they had taken, but most would not have put this information together to see how these parts of the Bible belonged to one grand tradition.  This content would be the sort of information clergy could share with their congregations that would make clear, not only the conclusions about how the Bible came to be, but also the reasons for those conclusions.

The second thing this course would have done would be to work out the theology of the Bible’s authority in light of this critical methodology and its conclusions. This course would show how the historical reading of the Bible could actually enhance the Bible’s authority, not diminish it. I never had such a course and I’ve never found a book that quite does this (though one may exist and I just don’t know about it), so I decided to write what I wish I had had when I graduated from seminary.  And that meant that I needed to articulate for myself why I still looked to the Bible for answers to questions about what to believe and how to live.  One of my assumptions in writing was that, if I could write something that dealt with the issues I felt had been neglected, other seminary graduates would find it useful too.  I also wanted to write something that lay people could read on their own and understand.