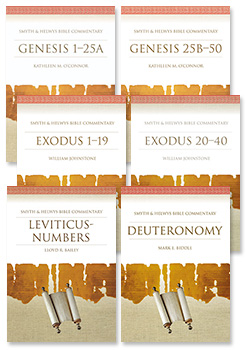 In Genesis, the Creator God brings forth life by the Word alone. Stories of disaster and destruction, often a crux of interpretation, find new resonance when set against the backdrop of a nation scattered and in disarray, for they reflect the suffering and theological dilemmas of invasion and warfare. The promises of God to Abraham form the heart of the book and offer more than mere survival; they promise abundant life, children beyond counting, overflowing blessings, and life begun again in the land. Genesis is a profound resource of faith for all communities and individuals who have known loss and seek new life.

The Ten Commandments also provide key guidance about how to read the book of Exodus. The content of the Ten Commandments that Moses recalls in Deuteronomy 5 differs in several respects from the edition that Exodus 20 records. The differences between the version that Deuteronomy recalls and the present edition of Exodus extend far beyond the Ten Commandments and concern vital matters like covenant, law, and the festivals by which Israel celebrates these institutions. Johnstone’s commentary argues that these differences are not to be glossed over but provide evidence of a dialogue between two voices that runs throughout Exodus and beyond. Dialogue is central to the formation and interpretation of Scripture and is essential to the ways in which humans attempt to speak about God.

The contrast in appreciation of Leviticus and Numbers by the synagogue on the one hand, and by the church on the other, is little short of astonishing. The former has considered it crucial to an understanding of God and of the nature of the "chosen people" of Israel. The latter has usually reduced it to allegory or as a mere historical record of Israelite religion. In this new volume, Hebrew Bible scholar Lloyd R. Bailey examines these often overlooked or under-appreciated books of Moses in the contexts of both the Jewish and Christian traditions.

Deuteronomy, the last and widely considered the most influential of the five books of the Pentateuch, preserves the three addresses Moses delivered to the people of Israel just prior to his death and their entry into the promised land. Its name, which means "second law", represented a reiteration, explication, and, to a degree, expansion, of the sole covenant between God and Israel. It was a reinterpretation of the law designed to meet the needs of a new generation facing a new future. In this volume of the groundbreaking Smyth & Helwys Bible Commentary series, Old Testament scholar Mark Biddle skillfully leads his readers to consider how these words which have often confounded the casual reader can help us understand and meet the needs of our own generation as well.

Kathleen M. O’Connor is William Marcellus McPheeters Professor of Old Testament, Emerita, at Columbia Theological Seminary in Decatur, Georgia. She holds a PhD from Princeton Theological Seminary, an MA from Providence College, and a BA from the College of New Rochelle. She has taught frequently in local churches and community groups and given courses in Central America, Thailand, Japan, and Ireland.

William Johnstone is Emeritus Professor of Hebrew & Semitic Languages, University of Aberdeen, and an ordained minister of the Church of Scotland. He is a graduate in Divinity and in Hebrew and Arabic from the University of Glasgow, Scotland, and studied at the University of Marburg, Germany. He participated in archaeological excavations at Ras Shamra/Ugarit in Syria and at Enkomi/Alasia in Cyprus and was epigraphist to the Marsala Punic Ship expedition, Sicily. His main research interest in the field of Hebrew Bible has lain in the analogy that Chronicles provides for the composition of the Pentateuch. He has published a collection of essays on the subject and a two-volume commentary on Chronicles, as well as contributing the volume on Exodus in the Sheffield Old Testament Study Guides. This two-part commentary on Exodus completes that circle of studies.

Lloyd R. Bailey, Sr., is a retired Professor of Hebrew Bible at the Divinity School, Duke University and now serves as Barrow Professor of Religion at Mount Olive College and as Adjunct Professor of Religion at Methodist College. He is a United Methodist Clergyman, author of fifteen books, more than seventy articles in encyclopedias and journals, has numerous television appearances in documenteries on the Bible, and has served as President of the Society of Biblical Literature.

Mark E. Biddle served as professor of Old Testament at Baptist Theological Seminary at Richmond. His other publications include A Redaction History of Jeremiah 2:1-4:2(TVZ), Polyphony and Symphony: Rereading Jeremiah 7-20 (Mercer), numerous articles, and several translations.