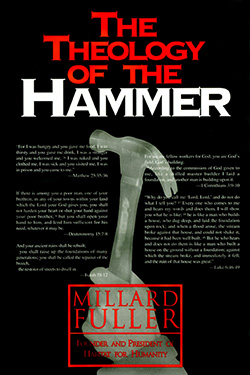 By the age of thirty, Millard Fuller had come face-to-face with the reality of the American dream — he was a millionaire workaholic with a marriage on the skids. The cure was a radical one. The Fullers sold their business, donated all but a few thousand dollars to charity, and went in search of a new dream. Twenty years later, Fuller and his wife Linda are sharing that dream: Habitat for Humanity International. This exciting release continues the story of Habitat for Humanity, an organization that helps us make shelter a matter of conscience. Founder Millard Fuller describes the applied theology that directs and energizes this organizations efforts.

Millard Fuller was the founder and president of Habitat for Humanity for 29 years prior to founding The Fuller Center for Housing in 2005. Fuller’s business expertise and entrepreneurial drive made him a millionaire by age 29. Then, after a re-dedication of his life to family and to following God’s path, Fuller and his wife, Linda, decided to sell their possessions and give their money to the poor. Following mission work in Africa, the Fullers founded Habitat for Humanity in Americus, Georgia, in 1976.

I have always been a strong supporter and admirer of the outstanding work Habitat for Humanity is doing across America— and indeed around the world— to make the dream of home ownership a reality for people in need. But Habitat does more than build houses; it builds families, neighborhoods, and communities by bringing people together in a spirit of friendship and teamwork.