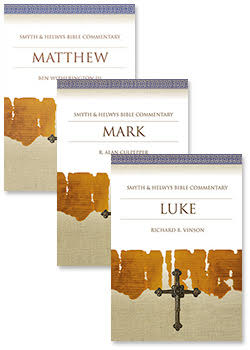 The Synoptic Gospels: Matthew, Mark & Luke. These books can be tracked together, as opposed to John.

Matthew: The Gospel of Matthew was placed first in the New Testament canon, and not without reason. By the time the canonizing process began in earnest in the fourth century, Matthew was the most popular and widely-used Gospel for a whole host of reasons. In the Western Church, certainly one of these reasons was because the book gave especial prominence and a special role to Peter in relationship to the community of Christ. This Gospel was also popular because it begins with a genealogy of Jesus’ lineage, it offers a church order of sorts, and it is the only Gospel to mention the ekklesia. It also had a fuller Easter story than we find in the earlier Gospel, Mark. Indeed, it was a much fuller Gospel in most respects.

In this highly-anticipated volume of the Smyth & Helwys Bible Commentary series, Ben Witherington III, renowned author of more than thirty books on the New Testament, considers the fullness that the Gospel of Matthew offers for those who both study and attempt to live out the words of Jesus today. As with each volume in this series, Witherington’s groundbreaking new commentary connects the insights of biblical scholarship to the larger world of faith.

Mark: Mark has been at the center of debate about the nature of the Gospels and their relationships to one another. The history of Markan scholarship therefore offers a good overview of basic issues in the study of the Gospels. It also provides an orientation to different perspectives on the basic introductory questions: who wrote the Gospel, when, where, and why? Mark highlights Markan themes and makes numerous cross-references between related passages. The Gospel, moreover, remains one of the pillars of the Christian faith and tradition, one that is endlessly fascinating, inspiring, and pivotal for our understanding of Jesus.

Luke: The Gospel of Luke narrates the life of Jesus from the nativity stories, to Jesus’ baptism and temptation, ministry in Galilee, journey to and teaching in Jerusalem, and finally his death and resurrection. In his engaging guide to Luke’s account, Richard Vinson accompanies readers on their own compelling journey—a journey through the life of Christ as seen through the lenses of critical scholarship and contemporary culture. As a result, we cannot turn away from Luke’s primary messages: the good news of the Kingdom of God and Jesus’ emphatic teachings on wealth and poverty, repentance and forgiveness, and the role of women in Jesus’ ministry.

Matthew: Ben Witherington III is Professor of New Testament Interpretation at Asbury Theological Seminary in Wilmore, Kentucky. A graduate of UNC–Chapel Hill, he went on to receive the M.Div. degree from Gordon-Conwell Theological Seminary and a Ph.D. from the University of Durham, England. He is now considered one of the top evangelical scholars in the world and has written over thirty books, including The Jesus Quest and The Paul Quest, both of which were selected as top biblical studies works by Christianity Today.

Mark: R. Alan Culpepper holds degrees from Baylor University, Southern Baptist Theological Seminary, and Duke University. He is the founding dean of the McAfee School of Theology at Mercer University in Atlanta, Georgia. Before coming to Mercer, Alan taught New Testament at Southern Baptist Theological seminary and at Baylor University. He has written extensively about the Gospels, and some of his works include The Johannine School; Anatomy of the Fourth Gospel; John the Son of Zebedee: The Life of a Legend; “The Gospel of Luke,” in the New Interpreter’s Bible series; and The Gospel and Letters of John. He is the New Testament general editor of the Smyth & Helwys Bible Commentary series and lives in Stone Mountain, Georgia.

Luke: An Alabama native, Richard B. Vinson was educated at Samford University, Southern Baptist Theological Seminary, and Duke University. He has served churches in Alabama, Nebraska, Kentucky, North Carolina, and Virginia. Vinson taught at Averett University (Danville, Virginia), where he was dean of Arts and Sciences for five years, and at Baptist Theological Seminary at Richmond, where he was dean of the faculty. Vinson currently is a visiting professor in the Department of Religion at Salem College (Winston-Salem, North Carolina).