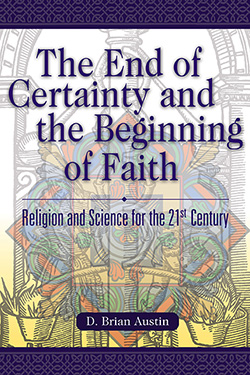 In many ways human advance and even survival depend on the harmonization of our religious and scientific instincts, instincts that have diverged drastically in modern times. The End of Certainty and the Beginning of Faith portrays a vision for uniting the aims of science and Christian faith by examining the retreat from certainty that characterizes contemporary science and philosophy.

Science in the 20th century is beginning to realize, through a retreat from claims of certainty, its affinity with the heart of faith. Drawing on the thought of American philosopher Charles Sanders Peirce, D. Brian Austin charts a course for this harmonization into the fuzzy but astoundingly fruitful future.

This chancy, creative, and open worldview, assembling itself piecemeal from advances in the specialized sciences, is deeply congenial to a robust Christian faith. For this universe is not one of foregone conclusions, but a world of inexorable uncertainty, pervasive randomness, and real risk that calls for real commitment. Austin describes the broad philosophical and scientific reasons behind the growth of this newly prevalent worldview and suggests reasons why it promises to make allies of religion and science.

D. Brian Austin is Associate Professor of Philosophy, Carson-Newman College, Jefferson City, TN. He received a John Templeton Foundation Religion/Science Course Award in 1998 and has written widely for both lay and scholarly audiences on religion/science issues.