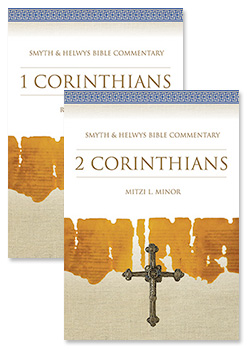 Perhaps more than any other “book” in the New Testament, 1 Corinthians offers readers a window to the life of the early church. Through this window Scott Nash's commentary helps us catch a glimpse of a community of faith struggling with questions of identity, relationship, belief, and practice. Yet our vision through the window of 1 Corinthians is not without significant limitations. The author of 1 Corinthians, the apostle Paul, has framed the shape of the window. For the most part, we can see only what Paul wished to expose and only in the ways he wished to expose them. We cannot know beyond any doubt that his presentation of the situation was an accurate reflection of that situation, nor can we be certain that we even correctly understand what Paul presented.

Mitzi L. Minor’s commentary on 2 Corinthians takes the reader deep into the thought world of Paul and his congregation at Corinth, exploring the social and theological tensions that shape Paul’s relationship with the Corinthian Christians. His letter expresses his joy that prior “severe” correspondence had been positively received and addresses the issues that were tearing the church apart; for one, false teachers who were sowing discord and maligning Paul’s character. Paul finds as well that many Corinthian Christians have repented of their rebellion, and he encourages them even as he seeks to vindicate his apostleship to those who challenged him.

Robert Scott Nash is the Columbus Roberts Professor of New Testament in the Roberts Department of Christianity in the College of Liberal Arts of Mercer University in Macon, Georgia. Before that he was the Barney P. Averitt Professor of Religion and chair of the Department of Religion and Philosophy at Brewton-Parker College in Mount Vernon, Georgia. He has also been the managing editor for Mercer University Press and the senior vice president, book division, for Smyth & Helwys Publishing. He is currently the senior editor for the journal Perspectives in Religious Studies and the project editor for the Smyth & Helwys Bible Commentary series. He is the author of The Church as a Pilgrim People and the editor for books on Galatians, Ephesians, and the Sermon on the Mount.