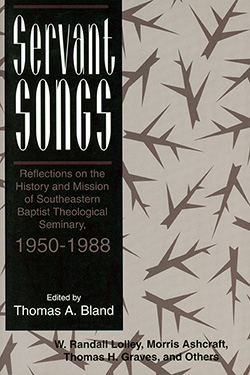 Bland examines the origin, development, and demise of Southeastern Seminary as a progressive, inclusive, Southern Baptist institution. Twelve contributors, including Randall Lolley, Tom Graves, and Morris Ashcraft, who have served as administrators and/or professors at Southeastern combine objective documentation with subjective reflection as together they tell the story of a unique seminary.

This book shows convincingly, I think, that—though Southeastern Seminary was founded as a progressive Southern Baptist institution of higher learning; though it did attempt to fulfill its educational mission somewhat differently from its sister seminaries, primarily because of some unique cultural circumstances in the region that it served; though it was characterized by a climate of warm ecumenism and intellectual honesty; and though, somewhat in the great 'pro-humanitate' tradition of Wake Forest University, it did seek to mediate redemptively between the world and the Word—it did not set out to destroy the faith of its students or to denigrate the Bible or to champion the cause of theological liberalism over the cause of Christ.