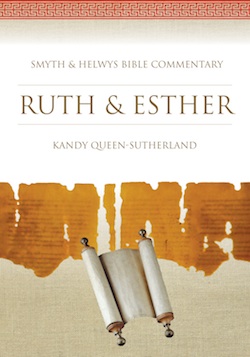 Ruth and Esther are the only two women for whom books of the Hebrew Bible are named. This distinction in itself sets the books apart from other biblical texts that bear male names, address the community through its male members, recall the workings of God and human history through a predominately male perspective, and look to the future through male heirs. These books are particularly stories of survival. The story of Ruth focuses on the survival of a family; Esther focuses on the survival of a people.

As biblical characters, Ruth and Esther are women of their time—and are likewise women for all time. Each conforms to the cultural norms of their story’s setting while pressing against boundaries of domination and privilege that limit female and outsider participation.

As female characters, Ruth and Esther stand in a long line of biblical women who emerge as heroes in their stories. Each is a part of ancient Israel’s larger story of what it means to be and live as people of God.

Kandy Queen-Sutherland is Sam R. Marks Professor of Religious Studies at Stetson University in DeLand, Florida, where she has taught for the last 25 years. Previously, she taught at the Baptist Theological Seminary in Rüschlikon, Switzerland, where she was Professor of Old Testament. She earned a BS from Winthrop College (1973) and MDiv and PhD from The Southern Baptist Theological Seminary (1976, 1982). She did post-doctoral work at the University of Zürich. During her years in Rüschlikon, she spoke widely across both eastern and western Europe, often the first woman to lecture and preach in Baptist contexts. She maintains her international interests as a frequent teacher of study-abroad courses in Europe and the Middle East. At Stetson University, she continues to teach and do research on the intersection between gender realities and the Bible.

This commentary assembles a rich collection of materials and sets them in conversation—and even in disputation—with the books of Ruth and Esther. New insights emerge here from sustained attention to the various canonical contexts of both books: this volume will enliven its readers’ study not only of Ruth and Esther, but of all five of the Megillot.