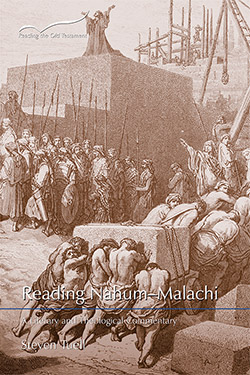 Nahum–Malachi, the last six books of the Christian Old Testament, span the period from the end of the Assyrian empire in the 7th century BCE to the fall of the Neo-Babylonian Empire and the emergence of Persia in the 5th century BCE. But these books also have a collective identity as the latter half of the Book of the Twelve-the ancient Jewish and Christian designation for the so-called "minor" prophets. This commentary maintains a balance between reading each of these six books in its own historical and social setting and considering the interrelationships and canonical functions of these books within the Book of the Twelve as a whole. Jesus ben Sirach wrote that "the Twelve Prophets . . . comforted the people of Jacob and delivered them with confident hope" (Sir 49:10). This commentary, following ben Sirach, proposes that the theme of the Book of the Twelve is a comforting word of hope and deliverance.

Steven Tuell is the James A. Kelso Professor of Hebrew and Old Testament at Pittsburgh Theological Seminary, where he has taught since 2005. His research interests are biblical prophecy, particularly the book of Ezekiel and the Book of the Twelve, and the biblical literature of the early Persian Period. An ordained elder in The United Methodist Church, Tuell has served churches in Pennsylvania, New Jersey, West Virginia, and Virginia. He and his wife, Wendy, have three adult sons.

Steven Tuell has written a lucid, concise, and informative commentary on the last six books of the Book of the Twelve Prophets. His commentary addresses historical, compositional, and theological issues in a manner that will be especially accessible for undergraduate and seminary students in Christian colleges, universities, and theological seminaries.

—Marvin A. Sweeney
Claremont School of Theology and
Academy for Jewish Religion

Steven Tuell has addressed his considerable skill as a good reader of texts to the much neglected six “minor” prophets who close the Christian Old Testament. By his alert, steady attentiveness he shows why these neglected books merit attention, and why the neglect of them is a misfortune. Tuell’s reading is fresh, reliable, and suggestive. His commentary will be, in time to come, a substantial reference point for our continuing work and study.

With admirable clarity and characteristically well-informed insight, Steven Tuell’s exegesis engages the historical particularity of the final six witnesses collected into the prophetical “Book of the Twelve.” Citing Sirach 49:10 as his mandate, he is also keenly attentive to the ways these individual voices contribute to the theological vitality of the book as a whole. In short, readers will appreciate that he achieves the balance he sets as his interpretative goal.

This well-written book by a leading scholar in prophetic literature is a welcome addition to the literature on the minor prophets. Both graduate students and pastors, especially, will appreciate the erudite discussions of issues of trans- mission, translation, and structure, coupled with a keen theological sense of how these texts speak to the world today.