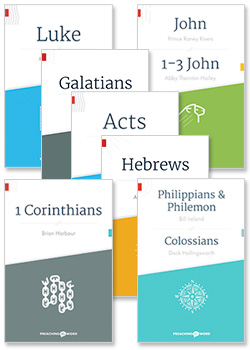 The Preaching the Word commentary series seeks to interpret the books of the Bible. But unlike other commentaries, this series also exists as a testament to the Word preached, unfolding in within communities of faith. Thus, the series allows us to approach the New testament as the first recipients did: as hearers of God's Word in a real time and place.

1 Corinthians In this collection of sermons based on Paul’s first letter to the believers in Corinth, Brian Harbour responds to two deep needs within today’s church: “biblical” preaching and help relating the church to a rapidly changing world. Through critical interpretation, Harbour seeks to explain the culture of Corinth and the strategies the church could have employed in response. This is a rich resource for those seeking the deeper insights of God’s word, who want to struggle with both the difficult and the simple texts, who want to know how God’s word to an isolated group of Christians on the cusp of change intersects with their lives today.

Acts Because we are blessed with a worldwide community of faith, we easily forget that today’s Church was built person by person, congregation by congregation, beginning with Christ’s ascension. In this collection of sermons on the book of Acts, William Shiell examines the disciples’ efforts as they learned to share the gospel and foster character formation and fellowship. With characteristic insight, Shiell reveals how the resurrection of Jesus and the power of the Spirit disrupted cities across the Mediterranean—and how this message and Power are still capable of “turning the world upside down.” Finally, Shiell outlines ways the gospel challenges us as it crosses boundaries and changes lives, revealing our inherited calling to build a church for every people and every generation.

Galatians is Paul’s attempt to build bridges and to unify people across partisan divides that had formed in the early Christian movement.We sometimes forget about the ethnic and cultural divisions that existed in the early Christian church. A movement that had risen from fervent Jewish faith was now beginning to spread to Gentile people across the Mediterranean. In Galatians, Paul is speaking to one side of the divide. In this collection of sermons based on Paul’s letter to the church at Galatia, pastor Tyler Tankersley reaches into this past to help us hear Paul’s words for the divides we face in our lives today.

Hebrews The book of Hebrews often gets caught in a kind of biblical black hole—it isn’t preached on much because pastors don’t hear it preached on very much. Yet Hebrews contains one of the most sophisticated discussions of the meaning of Jesus for the life of faith. In this collection of sermons, preached jointly, Anne Scalfaro and Andrew Daugherty deeply engage with this complex text to make Hebrews relatable, guiding us to hear the voice through whom God spoke in the first century, and who also speaks to us in the twenty-first.

John, 1-3 John John’s distinctiveness may be why it’s one of the most treasured books in the New Testament. Although it contains fewer miracles than the other Gospels, and almost none of the parables, John expands our understanding of who Jesus is, beginning with the very first verse: “In the beginning was the Word . . . .” So too do three letters attributed to the same author call the worshiping church to reconsider the meaning of Christ’s life, death, and resurrection. With critical interpretation and relatable language, Prince Raney Rivers and Abby Thornton Hailey delve into each of these four New Testament books, examining themes of truth and love, light and darkness, belief and life.

Luke In the early days of a movement rooted in Judaism, the author of Luke and Acts, two of the most beloved books of the New Testament, wasn’t just a newcomer among Jesus’ followers; he was also a Gentile. It’s little wonder, then, that Luke highlights religious and social dynamics throughout his Gospel, paying careful attention to how Jesus welcomes outsiders and rebukes insiders. Interpreting Luke’s account of the Jewish Messiah through a collection of sermons, Michael Smith dismantles the pious illusions behind political elitism and reminds readers that we are all outsiders in need of God’s grace. For anyone who has looked for themselves in biblical stories, this might be their book.

Philippians & Philemon, Colossians Although we have unprecedented means and opportunity to connect with others, our modern communication tends to be quickly, almost thoughtlessly, supplied—a sharp contrast to the letters sent by Paul and other church leaders in the first century. In this collection of sermons, Bill Ireland and Dock Hollingsworth dig into the cultures, struggles, and strengths that shaped the writing and receiving of three such letters. Through critical interpretation, Ireland focuses on how the relationship between pastor and congregation informs the theological and practical advice shared with the church at Philippi and a man named Philemon. Hollingsworth, meanwhile, examines how the Colossians, enthusiastic but new to faith, were affirmed and corrected from afar.

Brian L. Harbour retired after forty-one years of service as a pastor in churches throughout Georgia, Mississippi, Florida, Arkansas, and Texas. He received his PhD in theology from Baylor University. He currently serves as the president of SeminaryPLUS, a non-profit organization that produces resources for pastors and church leaders. He is the author of 17 Roadblocks on the Highway of Life and Jesus the Storyteller and writes the weekly commentary for NextSunday Resource’s Connections series. Brian and his wife Jan are the parents of four adult children. They also have five grandchildren.

William D. Shiell is the President of Northern Seminary in Chicago, Illinois, and has pastored four churches in Florida, Tennessee, and Texas. He is a graduate of Baylor University (PhD in Religion [Biblical Studies], 2003; MDiv, 1997) and Samford University (1994). He is the author of four books. Dr. Shiell and his wife, Kelly, have two sons, Parker and Drake.

Tyler Tankersley serves as Senior Pastor of Ardmore Baptist Church, in Winston-Salem, North Carolina. A native of Cape Girardeau, Missouri, he previously served as Pastor of First Baptist Church in Cape Girardeau. He was also the Director of the Create Program and Assistant to the Dean at Central Baptist Theological Seminary in Shawnee, Kansas. He holds a Bachelor of Arts in Anthropology from Southeast Missouri State University, and a Master of Divinity from Central Baptist Theological Seminary in Shawnee, Kansas. Tyler and his wife, Jess, were married in 2008. They have three children, Henry, Owen, and Charlotte.

Rev. Anne Jernberg Scalfaro is the Senior Pastor at Calvary Baptist Church of Denver (American Baptist). She is a graduate of Austin College (Sherman, TX) and Harvard Divinity School (Cambridge, MA), was ordained by Wilshire Baptist Church (Dallas, TX), and enjoys life in Colorado with her husband, Damon. Anne’s ministry, locally and nationally, is shaped by her belief that faith is a lifelong journey best shared in community, as it requires continual vulnerability, courage, and compassion.

Rev. Andrew Daugherty is Senior Pastor of Pine Street Church of Boulder, CO. He holds degrees in religion and theology from Belmont University and Wake Forest University Divinity School. He has written for such publications as the Huffington Post, Baptist News Global, and the Boulder Daily Camera. He is the co-host of Hyphenated Life podcast and serves on the national board of directors for the Baptist Joint Committee for Religious Liberty in Washington, DC. He lives in the Denver-Boulder area with his two children, Addison and Aidan.

Prince Raney Rivers is senior pastor of Union Baptist Church in Durham, NC. He currently serves as third vice-president of the General Baptist State Convention of North Carolina and on the board of trustees of Wake Forest University in Winston-Salem, NC.

Abby Thornton Hailey serves as Pastor of Broadneck Baptist Church in Annapolis, MD. She holds a BA in Religious Studies from the University of Virginia and a Masters of Divinity from Duke University. Beyond church work, Abby stays busy doing freelance writing and editing.

Reverend Michael A. Smith is a pastor, editor, and writer. He serves as senior pastor of Central Baptist Church of Fountain City, Knoxville, Tennessee. Smith is active in Baptist and ecumenical life. After four decades of pastoral ministry, he still enjoys helping Christians forge connections with other Christians, worship with intention, and practice hands-on ministries in the community and larger world.

A native of Greenville, Mississippi, Bill Ireland graduated from The Southern Baptist Theological Seminary (MDiv; PhD). He has served as pastor of churches in five states. At present, he advises pastors and frequently posts on his website, pastor- for-pastors.com.

Dock Hollingsworth is the senior pastor of Second-Ponce de Leon Baptist Church in Atlanta, Georgia. This is Dock’s first pastorate following an 18-year career at the James and Carolyn McAfee School of Theology at Mercer University.