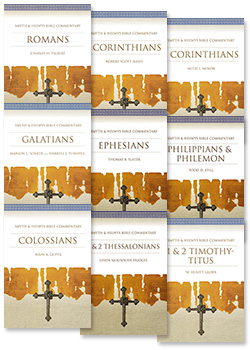 Romans was written to deal with the particular historical problem of the relations between Jewish and Gentile Christians in Rome. The function of Paul’s gospel was to unify these two, while its content was a theology that placed Jew and Gentile on an equal footing, both in their sin and in their salvation. Sometimes a modern situation corresponds to Paul’s original one. In such a case, Romans speaks directly. Most of the time, modern situations are different from those in Paul’s time. Romans still speaks. Although the content of Romans was elaborated in a particular cultural context, its applicability goes far beyond the original milieu, as Christian history has amply demonstrated. This commentary leads readers into the biblical world of Paul’s Letter to the Romans, while at the same time it seeks to open our ears to the lasting truth of God’s word for today.

Perhaps more than any other “book” in the New Testament, 1 Corinthians offers readers a window to the life of the early church. Through this window we catch a glimpse of a community of faith struggling with questions of identity, relationship, belief, and practice. Yet our vision through the window of 1 Corinthians is not without significant limitations. The author of 1 Corinthians, the apostle Paul, has framed the shape of the window. For the most part, we can see only what Paul wished to expose and only in the ways he wished to expose them. We cannot know beyond any doubt that his presentation of the situation was an accurate reflection of that situation, nor can we be certain that we even correctly understand what Paul presented.

Second Corinthians takes the reader deep into the thought world of Paul and his congregation at Corinth, exploring the social and theological tensions that shape Paul’s relationship with the Corinthian Christians. His letter expresses his joy that prior “severe” correspondence had been positively received and addresses the issues that were tearing the church apart; for one, false teachers who were sowing discord and maligning Paul’s character. Paul finds as well that many Corinthian Christians have repented of their rebellion, and he encourages them even as he seeks to vindicate his apostleship to those who challenged him.

In Galatians, Paul endeavored to prevent the Gentile converts in churches he had founded from embracing a version of the gospel that insisted on their observance of a form of the Mosaic Law. He saw with a degree of clarity not shared by many that such a message reduced the crucified Jesus Christ, who alone was the heart of the gospel, to being a mere agent of the Law. For Paul, the gospel of Jesus Christ alone, and him crucified, had no place in it for the claim that Law-observance was somehow necessary for believers in Christ to experience the power of God’s grace.

Ephesians transports the modern reader into the world of the early church. The author asserts that Ephesians was written to persuade its original readership that an ethnically inclusive church based on religious affiliation and faithfulness was part of God’s plan and that both Jew and Gentile were equal partners in the new religious commonwealth.

In this commentary on Philippians & Philemon, the author turns his learned attention to both a deeply loved letter (Philippians) and a frequently overlooked letter (Philemon) of Paul. With clarity and care, Still lays bare the meaning of these letters along lexical and socio-historical lines. What is more, the author is attentive to the rhetorical features, theological dimensions, and the pastoral possibilities of these texts. Still seeks to think Paul’s thoughts after him and to capture the Apostle’s affection for a beloved congregation and a recently converted slave.

In Paul’s letter to the Colossians, the reader is introduced to a supreme Christ who created earth and vanquished the power of death. However, this same Christ chose to bear the shame of death on a Roman cross in order to bring restoration and reconciliation to humans and all of creation affected by the chaos caused by sin. The enduring message of Colossians is uniquely challenging and instructive precisely because it testifies to the church’s cruciform life in obedience to this crucified cosmic Lord, Jesus Christ.

First and Second Thessalonians explore the first-century Mediterranean world in which the Apostle Paul writes to the community of faith in Thessaloniki. It is a complex dialogue among the Thessalonian believers, the young missionary Paul, and the readers who would follow through the centuries. Known as the Thessalonian Correspondence, these writings give us a wide window into this ancient environment where Paul lived, worked, and taught. What community fears, joys, or trauma gave rise to his words? What were the social and cultural experiences of this community of new believers? How did they understand the life of faith? How did they manage issues of life and work, faith and profession? These letters also help us, the twenty-first-century readers, understand Paul’s perspectives on leadership, ethics, community life, and death. These letters encourage and challenge us, as they encouraged and challenged the community in Thessaloniki, to live faithfully and lovingly with one another as we go about our work and worship.

The letters of 1 and 2 Timothy and Titus have been grouped together and referred to as the “Pastoral Epistles” because they are addressed to individuals charged with the oversight of certain churches and, therefore, share common subject matter.

Charles H. Talbert served as Distinguished Professor of Religion at Baylor University in Waco, Texas. He serves as editor of the Reading the New Testament series and is author of Reading Luke, Reading John, Reading Acts, and Reading Corinthians in that series.

Robert Scott Nash is the Columbus Roberts Professor of New Testament in the Roberts Department of Christianity in the College of Liberal Arts of Mercer University in Macon, Georgia. Before that he was the Barney P. Averitt Professor of Religion and chair of the Department of Religion and Philosophy at Brewton-Parker College in Mount Vernon, Georgia. He has also been the managing editor for Mercer University Press and the senior vice president, book division, for Smyth & Helwys Publishing. He is currently the senior editor for the journal Perspectives in Religious Studies and the project editor for the Smyth & Helwys Bible Commentary series. He is the author of The Church as a Pilgrim People and the editor for books on Galatians, Ephesians, and the Sermon on the Mount.

Darrell J. Pursiful earned both a PhD and MDiv from Southern Baptist Theological Seminary. He is senior editor of adult curriculum at Smyth & Helwys Publishing as well as an adjunct professor in the Roberts Department of Christianity at Mercer University. He has also served as a pastor of churches in Kentucky and Indiana.

Thomas B. Slater is professor of New Testament Language & Literature in Mercer University’s James & Carolyn McAfee School of Theology. Slater has published in leading scholarly journals around the globe, including Journal of Biblical Literature, New Testament Studies, and Biblica. Before coming to Mercer, he held a dual appointment at the University of Georgia in the Institute of African American Studies and the Department of Religion. A recipient of both an Overseas Research Scheme Award to pursue doctoral studies in the United Kingdom and a research grant from the Society of Biblical Literature to work on the Son of Man question, Slater has degrees from Perkins School of Theology, SMU (MTh, DMin) and King’s College London, the University of London (PhD). Slater is also an elder in full connection in the Georgia North Region of the Christian Methodist Episcopal Church.

Todd D. Still serves as The Charles J. and Eleanor McLerran DeLancey Dean and The William M. Hinson Professor of Christian Scriptures in the George W. Truett Theological Seminary of Baylor University. He earned his B.A. from Baylor University, M.Div. from South-western Baptist Theological Seminary, and Ph.D. from the University of Glasgow. Still is the author of Conflict at Thessalonica and of Colossians in The Expositor’s Bible Commentary: Revised Edition, the editor of Jesus and Paul Reconnected, and a co-editor of Image and Word and After the First Urban Christians. Still is also a licensed and ordained Baptist minister who frequently preaches, teaches, and serves as interim pastor in Baptist churches.

Nijay K. Gupta serves as Assistant Professor of New Testament at Northeastern Seminary (New York). He is the author of Worship That Makes Sense to Paul (Walter de Gruyter, 2010), Prepare, Succeed, Advance: A Guidebook for Getting a PhD in Biblical Studies and Beyond (Wipf & Stock, 2011), and he has published academic articles in periodicals such as The Catholic Biblical Quarterly, Journal for the Study of the New Testament, Horizons in Biblical Theology, Currents in Biblical Research, and Neotestamentica. He serves as co-editor of the Journal for the Study of Paul and His Letters (Eisenbrauns) and blogs on biblical studies at www.nijaygupta.wordpress.com.

Linda McKinnish Bridges (Ph. D., The Southern Baptist Theological Seminary) is associate director for admissions and an adjunct professor of religion at Wake Forest University. She teaches in the Department of Religion of the College, The School of Divinity, and in the Graduate School of Arts and Sciences.  As a college administrator, she also has served Wake Forest University as consultant to the provost, associate dean of the College, chair of the Department of Sociology, and director of the Women and Gender Studies Program. Linda McKinnish Bridges was a founding faculty member of the Baptist Theological Seminary at Richmond from 1991-2001 and a member of the faculty of Union Theological Seminary in Virginia/Presbyterian School of Christian Education from 1988-1991.

Hulitt Gloer is David E. Garland Professor of Preaching and Scriptures and Director of the Kyle Lake Center for Effective Preaching at Baylor University’s George W. Truett Theological Seminary. He is the author of As You Go: An Honest Look at Jesus’ First Disciples and Reading Paul’s Letters to Individuals: A Literary and Theological Commentary on Paul’s Letters to Philemon, Titus, and Timothy (with Perry L. Stepp).