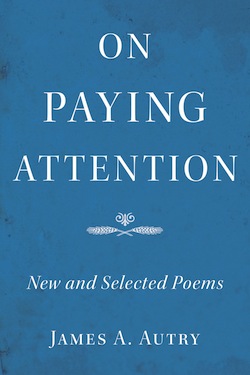 At intervals during a remarkable lifetime begun with the experience of growing up in the rural South before becoming an Air Force fighter pilot, a journalist, a romantic, an executive of a magazine empire, twice a husband, and father of an autistic child—Jim Autry has committed many of his thoughts to verse.

He appreciates the value of words, knowing he must be economical, using the boldest ones in his vocabulary to express himself in a limited number of lines. Laid out in simple, stark rows on the page, his words sparkle like gems on a strand.

In his newest collection, On Paying Attention, Autry’s poetry sings of boyhood intrigues in mystically Protestant Mississippi where “our fear of shame was stronger than our fear of snakes.” He tells of other fears, of flirting with doom in unfriendly skies; of pain and joy and sadness and love and death. In Autry’s words, cold business decisions that confront the spectre of failure or the loss of jobs turn into lyrical accounts of life on the bottom line.

His early recollections are interspersed with voices from his childhood, admonishing him: “Mind grabbing those scraps like that boys / good way to lose a finger.”

We follow him as he matures. He gives up bohemia for the world of business; he is successful, but all is not happiness.

In his sixth decade, as his second wife Sally gives birth, he wants the assurance of a healthy baby.

Through years split by splendor and apprehension, he perseveres.

Now in his eighties and afflicted with the beginning of Parkinson’s, Autry acknowledges mortality: “My life has been around a while / but, I can tell, is thinking about / moving on and taking me along . . . All I can do is drag my feet / finding reason after reason not to go.”

If On Paying Attention is a valedictory, it is a grand closing statement.

James A. Autry, a former Fortune 500 executive, is an author, poet, and consultant whose work has had a significant influence on leadership thinking. He is the author of twelve books, and his writings have appeared in many anthologies and magazines. Autry received considerable national attention when he was one of the poets featured in Bill Moyers' special 1989 series, The Power of the Word, on PBS, and in Moyers’ 1995 book, The Language of Life. In 2012 he appeared on Moyers & Companyon PBS, and his work has been featured on Garrison Keillor’s “Writer’s Corner” on National Public Radio. Autry serves on the national Advisory Board of Poets & Writers, Inc. and was a founder of the Des Moines National Poetry Festival. He holds four honorary degrees and is the recipient of a lifetime achievement award for service to the humanities from the Iowa Humanities Board.

Autry lives in Des Moines, Iowa, with his wife, former Lieutenant Governor of Iowa Sally Pederson and their thirty-one-year-old son. He has two grown sons by a previous marriage and is a grandfather of two.

Jim Autry’s poems have long snatched my breath by the beautiful and impressive ways they reveal the life of the man—his good heart, his keen eye, his feeling for the experience of others. They are full of surprise and delight at common things made marvelous. Read them slowly, read them aloud, read them with others. Prepare to laugh and cry, to pause and reflect, and to feel immense gratitude for moments of illumination and ecstasy, longing and remembrance. Jim Autry writes for thinking hearts.

I’ve been reading and re-reading Jim Autry’s poems for over thirty years. They still make me laugh, cry, wonder, and rejoice. I’m grateful for his voice in the world.

I was privileged to publish James Autry’s first two books of verse: Nights Under a Tin Roof and Life After Mississippi. In his hands poetry is about first love, baptism under fire, lessons learned, rain on a tin roof. At an abandoned farmhouse, the family long gone, daffodils keep coming up every spring. His voice is one of patience and staying power, and we are the better for it.