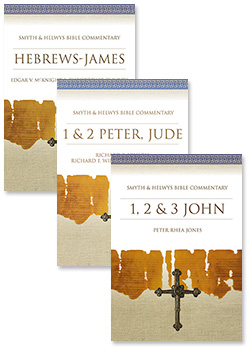 By bringing the ancient text into the world of present readers and to take readers back to the world of Hebrews, we are able to frame the author's treatment of the problems of our spiritual ancestors from the perspective of our modern world and problems presented in our pilgrimage.

One helpful way to think about the Letter of James is to view it as one might an important archaeological discovery or artifact: it is a surviving representative of a once-flourishing Jewish Christianity. The Letter of James reveals a form of ancient Christianity that is distinctly different from the Pauline line that later predominated.

What is to be done when a community of faith experiences division? The letters of 1-3 John nurture and strengthen believers while being realistic about those who are causing problems. Love one another and be hospitable, but beware of rabble-rousers and do not back down in the face of their troublemaking ways.

Christopher Church serves as Professor of Philosophy & Religion at the Baptist College of Health Sciences (Memphis, TN) as well as Ethics Consultant for St. Jude Children's Research Hospital, where he chairs the clinical Ethics Committee. He is a graduate of the University of Georgia and the Southern Baptist Theological Seminary.

Richard F. Wilson is the Columbus Roberts Professor of Theology and the Chair of the Roberts Department of Christianity in Mercer University’s College of Liberal Arts in Macon, Georgia. Since 1995 he has been active with the Baptist World Alliance; from 2010–2015 he will be the Chair of the BWA’s Commission on Christian Ethics. Currently he is committed to developing relationships between Ricks Institute, a K–12 boarding school near Monrovia, Liberia; Mercer University; and an array of private boarding schools and churches in the Southeast.

Watson E. Mills was professor of New Testament in the Roberts Department of Christianity in the College of Liberal Arts at Mercer University from 1979 to 2001. He was also the publisher for Mercer University Press; the editor for Perspectives in Religious Studies, Religious Studies Review, and the Bulletin of the Council of Societies for the Study of Religion; and the pastor of the Sharpsburg Baptist Church in Georgia. He was the general editor for the Mercer Dictionary of the Bible and the Mercer Commentary on the Bible and has written and edited numerous other books.

Peter Rhea Jones served as the J. Truett Gannon Professor of Preaching and New Testament at the McAfee School of Theology at Mercer University in Atlanta. He was born in Dyersburg, Tennessee, and earned a BA in English (with a minor in religion) from Union University, an MA in English literature at the University of Mississippi, an MDiv and PhD from Southern Baptist Theological Seminary, and a ThM from Princeton Theological Seminary.