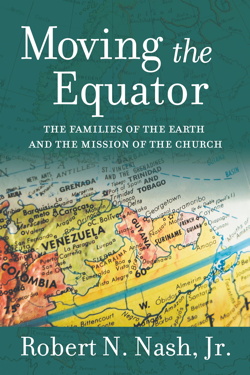 Moving the Equator makes the compelling argument that God’s desire from the very moment of creation was a diverse world of cultures, languages, worldviews, and religions. For this reason, God placed diversity at the very heart of God’s mission and intention in the world. The dispersion of human beings into various families, cultures, languages, and religions represented in the Tower of Babel story ensured that, at some point, human families could come together once again to share what we had learned with each other.

We now inhabit a diverse world, but the full benefit of such a world is possible only if we overcome our fears of other cultures, religions, and worldviews and bless each other with the understanding of God’s love, grace, and goodness that we have received. Moving the Equator encourages us along the biblical, spiritual, and theological paths toward such embrace so that we might receive the blessings of other families of the earth, even as we offer our blessings to them.

Rob Nash’s Moving the Equator offers a bold, creative, substantive, and generous rethinking of Christian mission in a pluralistic, multifaith world. This work is, simultaneously, a significant and in-depth project in biblical interpretation, theological method, and missiology. It pulls no punches in challenging the “Euro-tribal” Anglo church and in offering an interpretation of what has gone wrong with our self-understanding and missionary engagement. I consider this a very significant book for our current moment.

Professor Robert Nash knows the Christian mission movement well, both by research and experience. In this superb study, Nash surveys the ideas and actions that sparked the church’s vision of its global mission while challenging twenty-first-century Christians to renew that commitment by re-forming mission strategy, praxis, and yes, theology. His wise counsel should not be ignored.

With fresh perspectives on familiar Biblical texts and vivid anecdotes from the pastorate and seminary classroom, Rob Nash—professor of missions and world religions, pastor, and global citizen—challenges the Christian community to reimagine mission not as an errand into some godless wilderness, but as a journey to discover the divine presence already at work in the world’s peoples and cultures. Sly, subversive, and Southern, Rob Nash soulfully channels the tones of wisdom and prophecy to call the Church to a radical act of metanoia, of conversion and repentance, for the gospel’s sake.