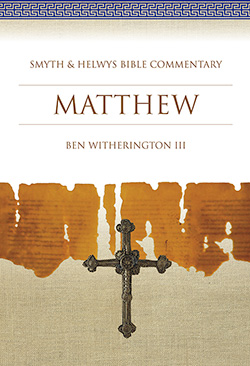 The Gospel of Matthew was placed first in the New Testament canon, and not without reason. By the time the canonizing process began in earnest in the fourth century, Matthew was the most popular and widely-used Gospel for a whole host of reasons. In the Western Church, certainly one of these reasons was because the book gave especial prominence and a special role to Peter in relationship to the community of Christ. This Gospel was also popular because it begins with a genealogy of Jesus’ lineage, it offers a church order of sorts, and it is the only Gospel to mention the ekklesia. It also had a fuller Easter story than we find in the earlier Gospel, Mark. Indeed, it was a much fuller Gospel in most respects.

In this highly-anticipated volume of the Smyth & Helwys Bible Commentary series, Ben Witherington III, renowned author of more than thirty books on the New Testament, considers the fullness that the Gospel of Matthew offers for those who both study and attempt to live out the words of Jesus today. As with each volume in this series, Witherington’s groundbreaking new commentary connects the insights of biblical scholarship to the larger world of faith.

Ben Witherington III is Professor of New Testament Interpretation at Asbury Theological Seminary in Wilmore, Kentucky. A graduate of UNC–Chapel Hill, he went on to receive the M.Div. degree from Gordon-Conwell Theological Seminary and a Ph.D. from the University of Durham, England. He is now considered one of the top evangelical scholars in the world and has written over thirty books, including The Jesus Quest and The Paul Quest, both of which were selected as top biblical studies works by Christianity Today.

The prolific Evangelical scholar Ben Witherington turns his attention here to the Gospel of Matthew in a substantial new commentary in the distinctive Smyth & Helwys series.  Aimed at teachers, pastors, seminarians, and interested laity, this commentary series provides a very attractive format and one geared for enjoyable study of the text—including appropriate and abundant art and illustrations, charts and sidebars with supplementary information, and a DC for further research leads.  Witherington’s commentary is well-informed and provides a clear and pastorally sensitive exposition of the text.  He surmises that the Gospel may have originated in Galilee, where the conditions implied in the Gospel might best be situated—a contestable theory but one that does not detract from the quality of the commentary.

In this historical-critical commentary, Ben Witherington III offers a thoroughgoing and compelling analysis of the Gospel of Matthew as an expression of early Christian Wisdom literature. Witherington views the first evangelist as a “Jewish scribe” who “sees his task as interpreting and presenting the life and teachings of Jesus as revelatory wisdom from God” (p.8). As Witherington sees it, the first evangelist “will argue that Jesus himself, rather than Torah, is the incarnation of God’s wisdom, and that it is therefore Jesus’ own wise teaching that provides the hermeneutical key to understanding Law, proverb, prophecy, parable, and other things” (p.8). Thus while Witherington identifies the genre of the Gospel as “ancient biography” (pp.11-13), he views the purpose of the Gospel in “sapiential” terms: “this Gospel seeks to give not only information or inspiration, but wisdom for believing and living a godly life” (p.2). In line with this “sapiential reading” of the Gospel of Matthew, Witherington interprets Matthew’s “Son of David” language in Solomonic fashion and portrays Jesus accordingly as “a greater royal figure than even the ultimate Jewish sage—Solomon” (p. 43). In his conclusion, Witherington then offers a final assessment of the sapiential thrust of Matthew’s Gospel: “[T]he author’s principle conviction is not just that the Gospel is eternally true…but that it is also a livable and useful truth—we too are called to fulfill all righteousness as Jesus did, and this call is not Law, but Wisdom” (p. 539).

The strengths of Witherington’s commentary lie in the clarity of its structure and in the significant wealth of its historical, exegetical, and homiletical reflections on the text of Matthew’s Gospel. Witherington opens his commentary with an extensive and helpful introduction in which he discusses authorship, genre, character, provenance, audience, and dating of the Gospel. Striking here is his intriguing and carefully argued proposal that this Gospel reflects a Galilean provenance, most likely from the town of Capernaum. Witherington bases his conclusions on the Jewish character of the Gospel and the corresponding likelihood that “[T]he Christian audience to whom the First Evangelist writes is in a location where there is considerable Jewish presence, and furthermore a place where the majority of the audience itself is Jewish” (p.21). Witherington concludes his introduction with reflections on the intended use of the Gospel and the ways in which Matthew has been read throughout history.

The organization of Witherington’s commentary is straightforward. Following the first three chapters (focused on 1:1-25; 2:1-23; and 3:1-4:16, respectively), Witherington structures his commentary by means of the literary divisions between narrative and discourse material. Within each chapter, Witherington first offers “Commentary” (i.e., historical and exegetical discussion of the text) and then concludes with “connections” (i.e., reflections on the homiletical and pedagogical potential of the text). Throughout the commentary, he offers extensive background material within sidebars focused variously on language, cultural context, and interpretation.

Witherington exhibits masterful skill in relating the Matthean text to both biblical and non-biblical intertexts and to the cultural world of first-century Palestine. His methodological approach is clearly and consistently redactional. For each new textual unit, Witherington lists in specific detail the ways in which this text differs from its presumed source material in the Gospel of Mark or in Q. And within his discussions Witherington regularly adduces significant parallels from the Hebrew Scriptures, the Qumran texts, and other early Jewish writings. In his view, for example, the account of John the Baptist’s execution may reflect “the midrash on the story [of Esth 5:1-8] found in Midrash Esther 1:19-21 where Vashti’s head is brought to the king on a platter” (p.284). The saying in 16:18-20 may likewise reflect a Qumran prayer (1QH 6.23-28) in which “the worshipper is rescued and brought within a secure city founded and built upon rock ‘amid sheltering gates that vouchsafe no entrance, and secure bolts that do not shatter' (p.317).

On the cultural level, Witherington makes frequent and insightful reference to the “honor/shame” culture of first century Palestine. Thus Jesus commands his disciples not to move about from house to house on their mission journey (10:11), because this would “shame” their original hosts. (p.220). Similarly, the propensity of the religious leaders to be ostentatious in their religious and social practices (23:5-7) emerges from their need to “establish their own honor and that of their family in public” (p. 426). And Witherington points not only to the public “shaming” involved with Jesus’ crucifixion (p.471) but also to the failure of Jesus; family to “honor” him in his death by participating in his burial (p. 525).

In his “Connections,” Witherington offers wise counsel and fascinating reflections. He warns concerning the dangers of “artful dodging” in which “explaining the text becomes artful attempts to explain it away or explain that it does not say what it means or does not mean what it says” (p. 164). In similar fashion, he calls his readers to “avoid the tendency to whittle down or lop off the hard edges of [Jesus’] teaching” (p. 437). He highlights the importance of contextual exegesis, concluding that it is “necessary to help a congregation understand the character of Jesus’ culture and how it differed in various important ways from our own” (p. 436). And he ponders the striking reality that the Gospel of Matthew is so diverse that it “can be the source book for the pattern of living of the Amish and the Mennonites…and at the same time it can be the source of the Roman Catholic papal theology grounded in Peter” (p. 536).

But it is the thoroughgoing portrayal of Jesus as the Wisdom of God and the one who is “greater than Solomon” that provides the defining characteristic and creates the signal contribution of Witherington’s commentary. Witherington points insistently to the “Wisdom” motif that he finds present throughout the Gospel of Matthew from beginning to end; the flight to Egypt, the reception of the Spirit at Jesus’ baptism, the temptation of Jesus, the Sermon on the Mount, the healing ministry of Jesus, other significant sayings or parables of Jesus, Jesus’ reception at Nazareth, the feeding of the five thousand, Jesus walking on the water, the triumphal entry, the apocalyptic discourse, and Jesus Immanuel who will be “with” his disciples. The overall impact of this lengthy recital is powerful. Witherington builds a strong and convincing case for the Wisdom christology of Matthew’s Gospel.

But for all the evident strengths of Witherington’s commentary, there are likewise significant shortcomings. The most systemic of these is Witherington’s almost total disregard—except for helpful discussions of irony here and there—for the narrative character and integrity of Matthew’s Gospel. Instead of interpreting Matthew’s pericopes within the context of a free-standing and coherent Matthean narrative, Witherington focuses largely on establishing historical facts based either on external evidence or on the composite witness of the four Gospels. Evidence here lies in Witherington’s treatment of the star of Bethlehem, the flight to Egypt, the ethnicity of the centurion’s servant, the name of Matthew the tax collector, the miracles of Jesus, the location of John the Baptist’s imprisonment, the acclamations of the Jerusalem crowds, the “man” who hosts the Passover meal, the details of the Passover meal, and weather conditions at Jesus’ crucifixion. Witherington in fact concludes that “the reason the First Evangelist is able to give his Gospel such a sapiential and parenetic slant is because he assumes the audience has the basic historical material and outline from Mark” (p. 540).

Witherington occasionally offers unconvincing or even at times astonishing exegetical conclusions. In his discussion of the wedding banquet, for example, Witherington concludes that the “later servants beckoning the Jewish people are John and Jesus” (p. 408), overlooking the crucial fact that this parable concerns precisely the wedding banquet (i.e., the inbreaking of the dominion) for the king’s son (i.e., Jesus himself, the Son of God). Elsewhere, Witherington appears to engage in “special pleading” in an attempt to ameliorate the difficulty of Jesus’ words (thus p. 363 on divorce, p. 407 on the “vengeful” actions of the king, p. 422 on Jesus’ diatribe against the Pharisees, p. 430 on the implicit call to tithing, and p. 495 on the “sword” saying).