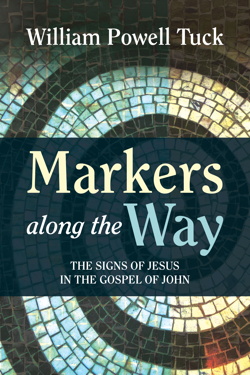 Markers along the Way examines ten “signs” from the Gospel of John and not only explores them for their revelation of what Jesus does but also shows how each of the signs presents an avenue into the nature of Jesus. Each sign reveals an aspect of his redemptive work. As we understand the meanings of these signs, we are drawn into a deeper awareness of God’s love, grace, and redemption and of our own need for a deeper commitment to the One who has revealed to us what God is like. The writer shows that John’s purpose is not so much to focus on Jesus as a miracle worker but as the Incarnate One.

William Powell Tuck, a native of Virginia, has served as a pastor in Virginia, Kentucky, North Carolina, and Louisiana, and as a seminary professor, adjunct college professor, and intentional interim pastor. He is the author of more than 30 books including The Difficult Sayings of Jesus and Star Thrower: A Pastor’s Handbook. He was awarded an honorary Doctor of Divinity degree from the University of Richmond. In 1997 he received the Pastor of the Year award from the Academy of Parish Clergy, and in 2016 received the Wayne Oates Award from the Oates Institute in Louisville, Kentucky. He and his wife, Emily Campbell, are the parents of two children and five grandchildren and live in Midlothian, Virginia.

"In recent years, as greater attention has been given to discover the historical Jesus, the Gospel of John has often been pushed aside in favor of the Synoptic Gospels. While John does offer a rather different portrait of Jesus, it is a mistake to ignore his portrayal of Jesus. In Markers along the Way, Bill Tuck brings the preacher’s touch to John’s focus not only on what Jesus does and says but on Jesus’ identity. Directing his attention to ten signs he discerns in John’s Gospel, we move from the miracle at Cana through the washing of feet, feeding of the 5000, and more, to the supreme sign, the resurrection, Tuck invites us to take hold of Jesus’ true identity and let that transform our lives."

"While getting from one place to the next in life is not as much of a challenge as it once was, thanks to the numerous navigational aids that are now at our disposal, no such navigational aid exists for those who looking to locate the route to abundant life. Fortunately, Bill Tuck’s explanation of the 'markers' in the Gospel of John remind us that we are not at all helpless in that respect. His interpretations of each of them go well beyond a surface view of the Johannine signs, enabling us to understand better their implications for both then and now. Pastors will especially appreciate how Tuck’s illustrations both enlighten Jesus’ teachings and show how those who preach them might do the same for congregations today. All readers will benefit from a deeper recognition of how these markers point us to a stronger confession of Jesus as the Christ, the Son of the Living God, and how everyone who believes in him has life in his name."