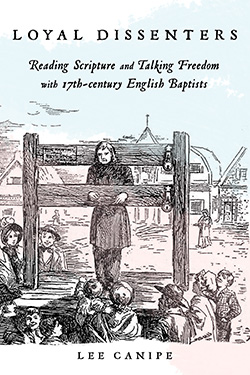 When Baptists in 17th-century England wanted to talk about freedom, they unfailingly began by reading the Bible—and what they found in Scripture inspired their compelling (and, ultimately, successful) arguments for religious liberty. In an age of widespread anxiety, suspicion, and hostility, these early Baptists refused to worship God in keeping with the king’s command. This book is about how these early English Baptists read the Bible together and were led by that reading to the startling faith convictions—startling, at least, in the context of 17th-century England—that eventually came to define them as a distinctive type of Christians.

Author Lee Canipe believes that it’s not only possible for Baptists in the 21st century to recover this habit of using Scripture to articulate their faith convictions about religious freedom, but that doing so is essential to preserving our unique Christian witness. With the boundaries between church and state as contested as ever, Loyal Dissenters offers scholars, clergy, and laypeople a fresh look at what Baptists believe—and how we can once again learn to talk about religious liberty in distinctively Christian language.

Lee Canipe serves as the pastor of Murfreesboro Baptist Church in Murfreesboro, North Carolina. He has also taught in the department of religion at Chowan University. Before coming to Murfreesboro, Canipe was a doctoral fellow in the J. M. Dawson Institute of Church-State Studies at Baylor University. He and his wife, Hilary, are the parents of a daughter, Helen, and two sons, Watt and Peter.

Lee Canipe’s wonderful book, Loyal Dissenters, is a must-read for all who care about Baptist history and current religious liberty debates. He makes a powerful case that we freedom-loving Baptists trace our roots to 17th-century religious dissenters, not the18th-century Enlightenment; to injunctions found in Scripture, more than philosophical reasoning. At the same time, our forebears’ dissent co-existed with loyalty to Caesar, as far as that allegiance did not run headlong into the fear of God. At our best, we Baptists (more than, say, our Anabaptist cousins) continue to be both/and people: free children of God and good citizens, too.

Christopher (Lee) Canipe writes as a “scholar-pastor,” a tradition that extends back to the Reformation in Protestantism and all the way to the second century in the broader Christian tradition. In short, he brings the insights of scholarly training to the pastoral task of guiding us on how to think (and act) about religious liberty. This book is a reminder that early Baptists neither had nor needed the Enlightenment to show them how to think about religious liberty. They took their arguments from the ancient and authoritative text of their faith—the Bible.

In Loyal Dissenters, Lee Canipe conveys a poignant reminder that Baptists have held certain foundational principles for more than 400 years...He also provides insight into how these convictions are eroding in the twenty-first century. The cause of this erosion is not from a persecuting, established church but, often, from Baptists themselves...Canipe's research is sound, the bibliography strong, and the style easy to read. It has found a home on my bookshelf, and I will probably make it required reading in my Baptist heritage class. I recommend this book to anyone who wants to know more about seventeenth-century English Baptists and their contributions to Baptist life.