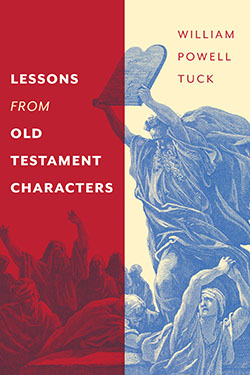 Many find the Old Testament difficult to understand with its ancient culture, strange rituals and customs, and primitive views of God. Tuck examines the literary and historical nature of the biblical passages he discusses and shows how these accounts of real people, with their strengths and weaknesses, address our contemporary world with lessons that provide genuine guidance for meaningful living. In his reflections on sixteen Old Testament characters, Tuck strives to show how their lives connect with and guide us today. These stories reflect the many ways God quietly works in the lives of individuals, and they challenge us to remain responsive to the divine presence today.

William Powell Tuck, a native of Virginia, has served as a pastor in Virginia, Kentucky, North Carolina, and Louisiana, and as a seminary professor, adjunct college professor, and an intentional interim pastor. He is the author of more than forty books including The Difficult Sayings of Jesus and Star Thrower: A Pastor’s Handbook. He was awarded an honorary Doctor of Divinity degree from the University of Richmond. In 1997 he received the Pastor of the Year award from the Academy of Parish Clergy, and in 2016 received the Wayne Oates Award from the Oates Institute in Louisville, Kentucky. He and his wife, Emily, are the parents of two children and five grandchildren and live in Richmond, Virginia.

With a close reading of major characters in the Old Testament, Tuck engages in deep and creative theological reflection on their contributions to contemporary life. He draws upon a lifetime of experience as both teacher and minister to address complex theological and ethical issues clearly and concisely, thus inviting readers to share in the adventure of biblical study that is enriching and transformative. This book offers an important corrective for all those who think of the Old Testament as merely “old” and irrelevant for the life of faith. The “life lessons” Tuck discerns in the biblical portraits of Moses, Jeremiah, Esther, Ruth, and a host of other exemplary characters deserve and reward thoughtful attention.

In Lessons from Old Testament Characters, Dr. William Powell Tuck has compiled a volume that is both confessionally and academically important. In these sixteen sermons, which he has earlier delivered, he demonstrates his skill both in the pulpit and as a teacher well-grounded academically. The typical churchman will find important materials about the meaningful living of one’s life, and the individual wishing to understand the academic undergirding of the material will also find data about the literary-historical nature of the text. Typical of the development is a sentence in chapter 1, “Adam and Eve: Our Story,” where he states, “It is difficult to comprehend how anyone reading it cannot see clearly its poetical, parabolic, allegorical, and mythical depiction . . . .”

The book is one from which an individual will profit, but it would also be an excellent volume for a study guide as a class or study group seeks to understand and appreciate this ancient text within our modern setting.

In Lessons from Old Testament Characters, William Powell Tuck considers both well-known and lesser-known men and women of the Old Testament with a view toward their lived faith. With Tuck’s help, one quickly realizes that these heroes are not dead and gone with nothing to offer readers in the twenty-first century. Instead, while our world and theirs are different in many ways, faithful living remains a challenge and the Old Testament remains a source of inspiration.

In fact, it is helpful to realize that even these biblical characters stumbled at times. Adam and Eve disobeyed and cast blame; Abraham put his own safety ahead of Sarah’s; Jacob schemed; Esau was impulsive; David committed adultery; Elijah and Jeremiah despaired; Naaman wanted fireworks. As to our humanity, we are not worlds away after all.

Yet there is more, for these characters and others like them found a better way through community, forgiveness, blessing, self-control, love, acceptance, courage, and faith. Even more so, these stories testify not only to human resilience but also to the enduring presence of God and to how God renews life both in ordinary and extraordinary ways.

When it comes to living faithfully amid the struggle, we have much to consider by way of Lessons from Old Testament Characters. Bill Tuck delivers these lessons with sermonic clarity, well-seasoned theology, and pastoral insight. There are many other biblical characters to consider; one can hope, therefore, that another volume in is the works.

William Powell Tuck’s Lessons from Old Testament Characters puts the Bible first. He has studied the biblical text in the company of biblical scholars and theologians, and he retells these Old Testament stories with a sure sense of what is relevant and needful for Christians. Tuck does not use his chosen characters simply to illustrate commonly held understandings and values. Decades of careful study and pastoral experience bear fruit in challenging theological reflection and refreshing practical applications.