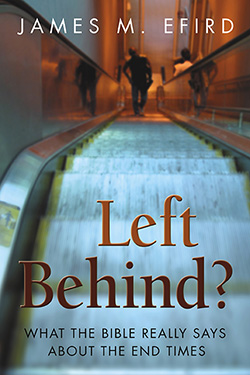 Will there be a Rapture?
How will we know the Antichrist?
Can we know when the end of the world will be?
What does the Bible really say about these things?

In the past ten years, few books of any variety have shown the kind of popularity and stirred the kind of controversy that have surrounded the Left Behind series of apocalyptic novels. The series has sold more than 62 million copies of its various books for adults, youth, and children, as well as been launched into a series of popular movies. This series about the end times has been a pervasive influence in our churches and in our culture.But what does the Bible really have to say about the end times? James M. Efird, a noted scholar of the Bible and apocalyptic literature, helps us explore the scriptural texts to answer the many questions raised by the series. He also guides us through an enlightening look at the peculiar history behind the books.Ideal for use by individuals or study groups curious about the end times, Left Behind? What the Bible Really Says about the End Times contains a helpful series of questions for reflection and study after each chapter.

James M. Efird began teaching in the Divinity School at Duke University as a graduate student in 1958, joined the faculty full time in 1962, and has taught Greek and biblical studies to generations of students. He is an ordained Presbyterian (USA) minister and has served for nearly fifty years as interim supply pastor for various churches. Committed to making the Bible understandable and properly understood for pastors and laity alike, he has been extremely active in the Divinity School Lay Academy program and has taught in churches of many denominations throughout the United States. He is the author of thirteen books and more than sixty articles. He and his wife Vivian live in Durham, North Carolina.

"Mickey" Efird has taught a legion of seminarians and many more lay people. His passion for teaching comes through especially in his teaching about the Bible's apocalyptic books. He thinks there's real homiletical gold there, which is being robbed by those he calls "Darbyists," dispensationalists who follow the teaching of John Nelson Darby as propagated by Hal Lindsey and the Left Behind novels. Efird provides an accessible history of that movement and the beginnings of a biblical response. Study questions and his readable style make this book ideal for ministers or laypeople.

In the past 10 years, few books of any variety have shown the kind of popularity and stirred the kind of controversy that have surrounded the "Left Behind" series of apocalyptic novels. The series about the end times has been a pervasive influence in the churches and in culture. But what does the Bible really say about the end times? James M.. Efird, a note Presbyterian scholar of the Bible and apocalyptic literature, explores the scriptural texts to answer the many questions raised by the series and guides readers through and enlightening look at the peculiar history behind the books.

The "Left Behind" series by fundamentalist authors Tim LaHaye and Jerry Jenkins has sold more than sixty-two million copies worldwide! That fact alone cries out for a book such as the one James Efird, Professor of Scripture at Duke University Divinity School, provides here. Writing for a lay audience, Efird gives the historical background to "dispensationalism" and to the original promoter of this type of interpretation, the Irishman James Nelson Darby, who was active at the end of the ninteenth century. The heart of the book is brief explanations of such key concepts as the rapture, the millennium, and the Antichrist, and an assessment of their alleged biblical justification. Although most Catholic audiences find this very unfamiliar and strange territory, the inroads of such fundamentalist perspective require that pastors and thoughtful laity be informed. This book will help.