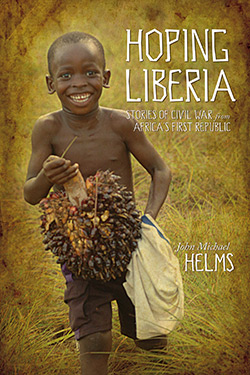 In Hoping Liberia, John Michael Helms weaves together multiple stories—the story of his friendship with Olu Menjay, the director of Ricks Institute in Virginia, Liberia; the story of their partnership in ministry; and the story of the nation of Liberia. . . . Helms immerses readers into a period of political turmoil and violence, a devastating civil war, and the immeasurable suffering experienced by the Liberian people. In the aftermath of these harsh realities, Liberian Christians held on to hope, and Hoping Liberia is ultimately an inspirational and uplifting story of faith being lived out and the body of Christ coming together and joining hands to do God’s work.

John Michael Helms is pastor of the First Baptist Church in Jefferson, Georgia. He holds a doctorate of ministry from Columbia Theological Seminary, a master of divinity from The Southern Baptist Theological Seminary, and a bachelor of science from Samford University. His first book, Finding Our Way—An Introspective Journey Through the Labyrinth of Life was published in 2006. He has won numerous writing awards from The Amy Foundation, and his sermons have been recognized for awards by the Baptist History and Heritage Society. He and his wife, Tina, have two adult sons, John, a US Marine, and Ryan, an All-American diver at the University of Tennessee.

Ricks Institute and Olu Menjay—a struggling school and a committed Christian—are together making a huge contribution to the restoration of previously war-torn Liberia. Ricks and Olu have captured the hearts and pocketbooks of a number of Christians and churches in our country. But no person has been more passionate for the support and success of Ricks than Michael Helms. An inspiring book about hope, Hoping Liberia is also a magic story of Christian stewardship.

Hoping Liberia is an inspiring work in every way. It tells a story, not just about what God is doing among Christians in Liberia, but also about the way God has tugged on Michael Helms’s heart and changed him and many others through their friendship with and service alongside Christian brothers and sisters in Liberia. This book indeed brought me much hope; maybe we Baptists can once again be known for our love and service and not for our fighting and politics. I strongly recommend Hoping Liberia.