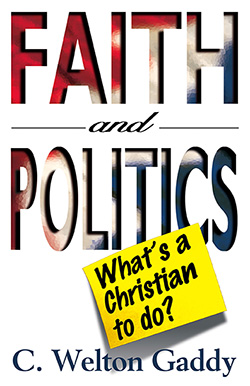 How do you decide for whom to vote? How do you think about religious groups with political agendas? Do faith and politics mix? In this useful resource for Christians, Gaddy draws upon his extensive positive involvement and influence on the Christian political arena to help readers sort through the multiple questions that arise in the midst of modern elections.

While ministering to churches with a message of inclusion, Dr. Gaddy emerged as a leader among progressive and moderate Baptists. Among his many leadership roles, he is a past president of the Alliance of Baptists and has been a 20-year member of the Commission of Christian Ethics of the Baptist World Alliance. His past leadership roles include serving as a member of the General Council of the Cooperative Baptist Fellowship, President of Americans United for Separation of Church and State, Chair of the Pastoral Leadership Commission of the Baptist World Alliance and member of the World Economic Forum’s Council of 100. Rev. Gaddy currently serves on the White House task-force on the reform of the Office of Faith Based and Neighborhood Partnerships.