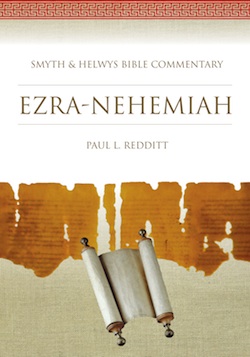 Ezra-Nehemiah describes events that occurred between 539 and 432 BCE, but the book itself was written between that latter date and about 200 BCE. Though it describes early events and perhaps incorporates authentic “memoirs” of Nehemiah, it also contains later lists, narratives, and thinking about that crucial century in the life of post-exilic Judah (or Yehud) and its neighbors.  Ezra-Nehemiah dutifully records both the successes and the excesses of three waves of returnees. It opens with the efforts of early returnees to rebuild the altar at the site of the Jerusalemite temple in 538/7 and the rebuilding and dedication of the temple in 520 BCE. It records a second return under Ezra perhaps in 458, and it reaches its saddest moment in Ezra 9–10, when Ezra himself demands the divorce of returned exiles who had married local Yehudite women. Nehemiah completes the narrative of the reestablishment of exiled Jews with its discussion of the rebuilding of the wall of Jerusalem and other actions in 445/4 and 432 by the returnees to solidify their control over the temple, Jerusalem, and post-exilic Yehud.

PAUL L. REDDITT is Emeritus Professor of Religion at Georgetown College and taught part-time at the Baptist Seminary of Kentucky. He earned his BA from Ouachita Baptist University (1963), MDiv from The Southern Baptist Theological Seminary (1967), and MA and PhD from Vanderbilt University (1971, 1972). During his time at Vanderbilt, he studied one year at the Eberhard Karls University in Tubingen, Germany. He has published extensively on the Minor Prophets (particularly Joel, Haggai, Zechariah, and Malachi) and on the book of Daniel and apocalyptic literature. Given the temporal connections between those biblical books and Ezra/Nehemiah, he has long held an academic interest in that literature as well.