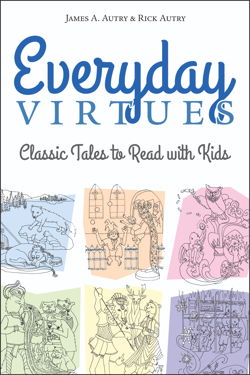 In a world too often dominated by consumerism and social media, this book of stories collected by a father and grandfather team invites adults and children to read together. Featuring the six virtues of justice, humility, courage, compassion, freedom, and respect, these entertaining and easily understood stories from all over the world focus on what makes us truly human.

Find the newly released audiobook of Everyday Lives narrated by activist and actor, Kathleen Turner at these sites:

James A. Autry, a former Fortune 500 executive, is an author, poet, and consultant whose work has had a significant influence on leadership thinking. He is the author of thirteen books, and his writings have appeared in many anthologies and magazines. Autry received considerable national attention when he was one of the poets featured in Bill Moyers’ special 1989 series, The Power of the Word, on PBS, and in Moyers’ 1995 book, The Language of Life. In 2012 Autry appeared on Moyers & Company on PBS, and his work has been featured on Garrison Keillor’s Writer’s Almanac on National Public Radio. Autry serves on the national advisory board of Poets & Writers, Inc., and was a founder of the Des Moines National Poetry Festival. He holds four honorary degrees and is the recipient of a lifetime achievement award for service to the humanities from the Iowa Humanities Board. Autry lives in Des Moines, Iowa, with his wife, former lieutenant governor of Iowa Sally Pederson, and their thirty-four-year-old son. He has two sons by a previous marriage and is a grandfather of two.

Rick Autry has been a lawyer working for the state of Iowa for more than thirty years. For seventeen years he was an Iowa assistant attorney general representing the Iowa Civil Rights Commission. He is a frequent speaker on employment law at legal seminars and author of Word Origins for Lawyers, published by the American Bar Association. He and his wife, Lyn, have been married for thirty-five years. Their two sons have graduated college and are both pursuing post-graduate education.

What a wonderful way to introduce and open a conversation on the essential elements of good character. Well done.

. . . a fresh and wonderful collection of classic stories from all over the world that teach us how to nurture the “kind-hearted virtues.”

I could have used these stories with my middle school students to complement the Greek and Roman myths. I’d read, listen and tell these stories in schools, places of worship, before bedtime or while I exercise. I’d email them to my friends and colleagues.

Hearing the voice of a trusted adult read this collection, a child could not help but engage in a dialogue about the heart and what makes us human.

I can think of no better way to strengthen bonds with children than to read this wonderful book.