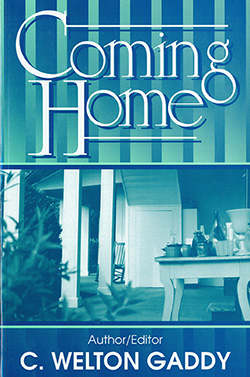 C. Welton Gaddy combines his own insight with some of the key sermons, lectures, and worship resources of the Northminster church in Monroe, Louisiana, to recount one group's pilgrimage to a ministry that approximates a New Testament church. Gaddy writes with the hope that this story of one church's journey home will inspire similar pilgrimages among others.

While ministering to churches with a message of inclusion, Dr. Gaddy emerged as a leader among progressive and moderate Baptists. Among his many leadership roles, he is a past president of the Alliance of Baptists and has been a 20-year member of the Commission of Christian Ethics of the Baptist World Alliance. His past leadership roles include serving as a member of the General Council of the Cooperative Baptist Fellowship, President of Americans United for Separation of Church and State, Chair of the Pastoral Leadership Commission of the Baptist World Alliance and member of the World Economic Forum’s Council of 100. Rev.Gaddy currently serves on the White House task-force on the reform of the Office of Faith Based and Neighborhood Partnerships.