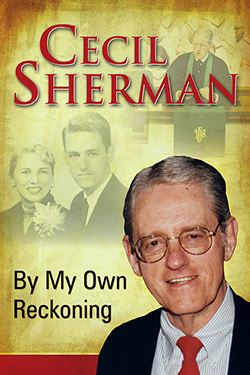 By My Own Reckoning is Cecil Sherman’s gift of memory to those whose lives he has touched through his many years of ministry and service. In this much-anticipated autobiography, Dr. Sherman reflects on his life as a pastor, as a husband and father, and as a key figure in the SBC political controversy of the 1980s. More importantly, Sherman shares with readers the intimate history of his life and ministry, from his origins as the descendant of preachers and farmers, to his pastoral years, and ultimately to the tender love story of caring for his wife, Dot, as she fades into the haze of Alzheimer’s disease.

Writing in the same astute, conversational style that has endeared him to so many readers of Formations commentary, Dr. Sherman has given voice to memories of family, Baptist history, and lifelong ministry that should not be forgotten.

This book chronicles the life of a man who has championed intellectual inquiry, freedom of the local congregation, the responsibility of individual, and independent spirituality. A longtime pastor for remarkable congregations, Dr. Sherman has written the biblical commentary for the Formations Sunday School curriculum for over 17 years. After distinctive pastorates, Dr. Sherman served as the first coordinator of the Cooperative Baptist Fellowship. Since retirement in 1997 he has taught at the Baptist Theological Seminary at Richmond. Cecil Sherman’s legacy of fortitude, independence, and spirituality continues through his students who study for future ministries worldwide.

Cecil Sherman served as CBF's first executive coordinator, as well as a professor of pastoral ministries at the Baptist Theological Seminary at Richmond. During his long career, Dr. Sherman served pastorates in North Carolina, Georgia, New Jersey, and Texas.

"Bill Leonard says being Baptist is messy. Bill Hull says being Baptist is an experience. So it should follow that what you have in hand is one Baptist’s narrative of a messy experience. Not so! What you have in hand is an ordered chronicle, a unique story, of a solitary human being— a man who arguably has been the most important Baptist of his generation, the most formative Baptist Christian of the past sixty years…who better than he can share a view from the inside of the Baptist family in this country since the 1950s? So with moist eyes and set jaw, Cecil bids you join him for “his story”— amazingly, a slice of our own free-church history as well."

"By My Own Reckoning reflects the honesty, integrity and courage of a towering figure in Baptist life. It is a poignant memoir that both inspires and disturbs. Cecil Sherman has given all of us a great gift in recounting his life and ministry."

"Cecil Sherman is the most important white, moderate Baptist in the South in the last two decades of the twentieth century. A "conservative person," congenitally so and in almost every way, he nevertheless led the "moderate" movement in the struggle against Southern Baptist Convention "fundamentalists." He was right more times in more ways on more issues than any other single person in the controversy. Personally, I am grateful for his courage, his tenacity, his wisdom, and his leadership."